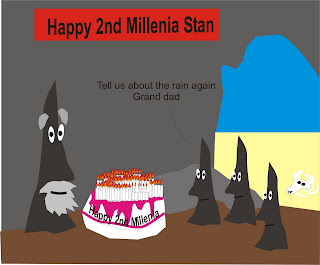 COMMENT: We missed ABC's coverage of this climate study that reports that analysis of stalagmites from NSW’s Wombeyan Caves reveal "the past decade of drought in south-eastern Australia is not unusual in the context of a longer-term drying trend.” Results of the study were presented by  Dr Janece McDonald, a conjoint fellow at the University of Newcastle’s School of Environmental and Life Sciences, at the recent Australian Earth Sciences Convention held in the ACT.

Perhaps we would have noticed if ABC had given it some prominence on its "Best of ABC" site?
Posted by Marc Hendrickx at 9:21 AM