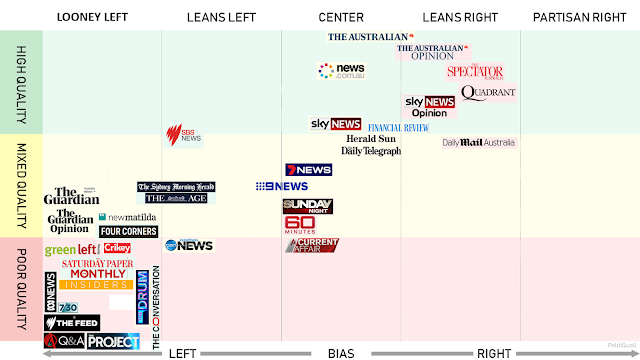 An independent survey of media consumers has confirmed suspicions that ABC has a strong left-wing political bias. Oz Media watchers were requested to rank various Australian news sources on their perception of quality and right or left-wing political bias. The unsurprising results found a strong left bias among Oz media outlets overall. The Australian Newspaper was ranked highest for quality, while SkyNEWS returned a neutral bias ranking.
ABC news programs were perceived to have a very strong left-wing bias with its main news and current affairs outlets falling into the Looney left side of the political spectrum. This must be of concern for ABC's chairperson Ita Buttross who has stated previously the organisation might have issues with bias, despite having a charter that is supposed to ensure it is apolitical.
Posted by Marc Hendrickx at 10:02 AM No comments:

The bias marches on... and on.

Gerard Henderson's column in today's Weekend Australian highlights the fact ABC is firmly stuck in trolley tracks of left-wing bias and nothing looks like shifting it back to the centre. Worth a read as usual....

It is just four months since the ABC’s mission to Bankstown in southwest Sydney. Led by ABC chairwoman Ita Buttrose and managing director David Anderson, dozens of the ABC family headed to the outer suburbs for a planning workshop aimed at making content that was more relevant to average Australians than what had previously been on offer. That’s how ABC management described the mission at the time.

Gaven Morris (ABC director news, analysis and investigations) told Nine Entertainment newspapers there were “some parts of the community that we don’t serve as well as we could”. This implied the taxpayer-funded public broadcaster was in search of the “quiet Australians” to whom Scott Morrison had referred to immediately after the May 18 election last year.

The Coalition’s victory had stunned many journalists, but none more so than the ABC’s key political commentators — virtually all of whom got the result wrong. So certain was 7.30 political correspondent Laura Tingle that she told 7.30 presenter Leigh Sales on the eve of the election the Labor Party “will” win and dismissed the possibility of a Coalition victory with a laugh.

It is not clear what, if anything, the ABC learned from the mission to Bankstown of recent memory. Maybe only that it is a long way from its head office in the inner-Sydney suburb of Ultimo. Certainly the ABC is just as much a conservative-free zone as it ever was — perhaps even more so.

Subscription required to read the rest
Posted by Marc Hendrickx at 9:22 AM No comments: