ABC pump up the alarm with this piece by "free lancer" and non climate expert Sue White:

In her description about herself Sue says she "can compile a good yarn on almost any topic, but she mostly focuses on health/wellbeing, environment, travel, careers and productivity."

Seems that definition spot on! Your tax dollars at work.
Posted by Marc Hendrickx at 12:09 PM 1 comment: 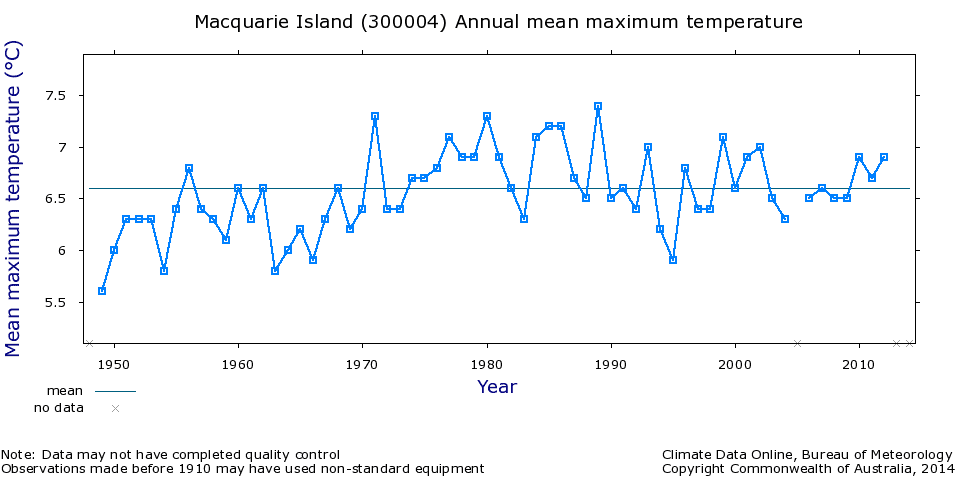 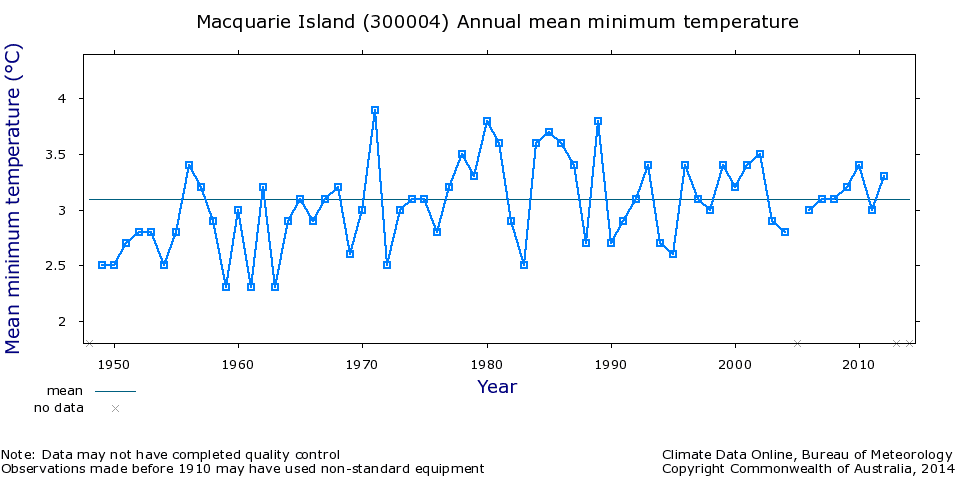 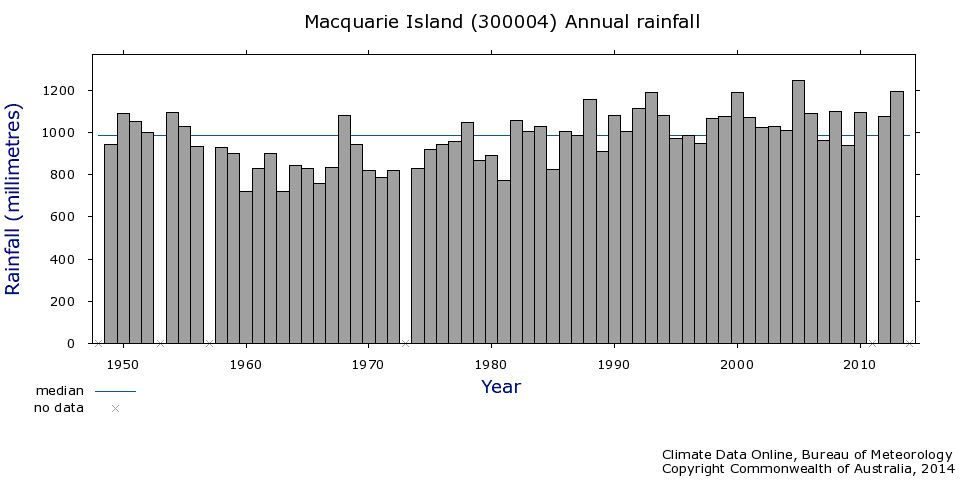 Dr Morag Glen, Senior Research Fellow, Perennial Horticulture Centre, TIA
“Dieback on Macquarie Island”
Abstract: Azorella dieback on Macquarie Island.  A. macquariensis is a keystone species of the dominant feldmark vegetation on Macquarie Island. In recent years it has suffered from a severe dieback yet no causal agent could be isolated. In an attempt to determine whether a potential pathogen is associated with the die-back next-generation sequence technologies were used to characterise fungal bacterial and oomycete communities associated with healthy and die-back affected plants. A species of Rosellinia was the most frequently detected fungal species overall and was strongly associated with roots and rhizosphere soil of die-back affected plants. While Koch’s postulates must be fulfilled to demonstrate that this pathogen is a primary cause of the die-back on Macquarie Island, this finding provides strong evidence to support this hypothesis. Current attempts to isolate the pathogen responsible for Azorella dieback include techniques and semi-selective media suitable for this genus.
About the Speaker: Morag is a molecular biologist and mycologist with an interest in forest health, biodiversity and biosecurity of natural ecosystems as well as plantations. Current work is focussed mainly on root rots and rusts.
Posted by Marc Hendrickx at 10:13 AM 1 comment:

Blog taking a break while more important things take precedence. Back when we are back. Thanks for your patience!

In the meantime ABC news being regularly scrutinised by BOLT, BLAIR, HENDERSON, QUADRANT AND CATALLAXY.

Cheers
Marc
Posted by Marc Hendrickx at 4:56 PM No comments:

A BELATED admission by the ABC that popular television science program Catalyst had demonstrated bias against mainstream medicine has been welcomed by health groups.
Catalyst sparked controversy seven months ago with a two-part special that described the link between saturated fats, cholesterol and heart disease as “the biggest myth in medical history’’ and downplayed the benefits of anti-cholesterol drugs known as statins.

That much of the media accepted the NCA without questioning its findings and conclusions either indicates they are naive or they have chosen to promote a particular agenda and this report fits their goal.
Prof. Roger Pielke Snr

Chris Uhlmann is now hosting AM. Instead of offering a fresh start on ABC's climate change coverage it seems we are getting more of the same pandering to alarmism and ignorance of the basic science that characterised Tony Eastley's time as AM host. Eastley recall was an MC for the Climate Commission but never declared this conflict of interest when interviewing commission representatives.

ABC once again focus on highly uncertain, potential effects of possible change in the US without once exploring the science and seeking broader scientific input.

ABC broadcast the following claim:
But having a look briefly through the report, they're really trying to make this personal, make Americans realise that it's more than catastrophic headlines; it's sometimes a little more subtle, even looking at the growth in allergies that people might suffer from.

And immediately followed with this...(odd the canned laughter was missing as all this represents are more unsubstantiated catastrophic headlines and a total absence of subtlety).

Let's have a listen to some of the scientists.


KIM KNOWLTON: Now heat - it's not just an inconvenience; it can be lethal. It can send thousands of people to emergency rooms, as it has done in the past. There's been a two to three week increase in the length of rag weed pollen production season. Now that matters to people who have asthma.
TOM KARL: The bottom line, the current path we're on, will result in a climate that is far different than anything that this nation has experienced.

Perhap's Chris could have sought an interview with other scientists...the authors of the piece below for instance...and comments from other climate scientists (eg. Pielke Snr, Judy Curry) but seems that's against the ABC climate creedo Chris appears following.

LISA MILLAR: We've already heard from Republicans who say that no doubt he'll get loud cheers from the liberal elites, the kind of people who leave a giant carbon footprint and lecture everyone else about low-flush toilets. They're not convinced that there is an urgency and the economy is far more important.

What the National Climate Assessment Doesn’t Tell You

The Obama Administration this week is set to release the latest version of the National Climate Assessment—a report which is supposed to detail the potential impacts that climate change will have on the United States.  The report overly focuses on the supposed negative impacts from climate change while largely dismissing or ignoring the positives from climate change.
The bias in the National Climate Assessment (NCA) towards pessimism (which we have previously detailed here) has implications throughout the federal regulatory process because the NCA is cited (either directly or indirectly) as a primary source for the science of climate change for justifying federal regulation aimed towards mitigating greenhouse gas emissions. Since the NCA gets it wrong, so does everyone else.
A good example of this can be found in how climate change is effecting  the human response during heat waves.  The NCA foresees an increasing frequency and magnitude of heat waves leading to growing numbers of heat-related deaths. The leading science suggests just the opposite.
Case and point. Last week, we had an article published in the peer-reviewed scientific journal Nature Climate Change that showed how the impacts of extreme heat are often overplayed while the impacts of adaptation to the heat are underplayed.  And a new paper has just been published in the journal Environmental Health Perspectives that finds that the risk of dying from heat waves in the U.S. has been on the decline for the past several decades.
By now, this should be rather unsurprising as it has been demonstrated over and over again. Not only in the U.S. but in Europe (and yes, Stockholm) and other major global cities as well.
The idea that human-caused global warming is going to increase heat-related mortality is simply outdated and wrong. In fact, the opposite is more likely the case—that is, a warming climate will decrease the population’s sensitivity to heat events as it induces adaptation.  We described it this way in our Nature Climate Change piece:

Some portion of this response [the decline in the risk of dying from heat waves] probably reflects the temporal increase in the frequency of extreme-heat events, an increase that elevates public consciousness and spurs adaptive response. In this manner, climate change itself leads to adaptation.
…Our analysis highlights one of the many often overlooked intricacies of the human response to climate change.

But this information often falls on deaf ears—especially those ears responsible for developing the NCA.

Judy Curry:
My main conclusion from reading the report is this:  the phrase ‘climate change’ is now officially meaningless.  The report effectively implies that there is no climate change other than what is caused by humans, and that extreme weather events are equivalent to climate change.  Any increase in adverse impacts from extreme weather events or sea level rise is caused by humans. Possible scenarios of future climate change depend only on emissions scenarios that are translated into warming by climate models that produce far more warming than has recently been observed.

Posted by Marc Hendrickx at 10:03 AM No comments: