Why your morning coffee will taste different and cost more

The countless cups of coffee downed during the UN's COP23 climate summit in Bonn may seem insignificant.But if coffee consumption has any message, it is that climate change is personal.
Worldwide, more than 2.75 billion cups of coffee are consumed every day. Half of all Australians love a good coffee to kick-start each morning. Yet, as climate change influences weather patterns around the world, coffee yields and quality are already suffering, and pests and diseases are on the rise. 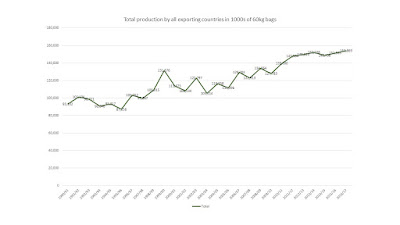 Mythbusted!
Posted by Marc Hendrickx at 7:47 AM No comments:

ABC cover the idiot Greens extension of a ban on GM crops in SA. The report lacks any inquiry into the long term consequences for SA. Looks like they'll be starving in the dark.

LINK to very ordinary report that does not ask any hard questions:
Genetically-modified crop ban extension in South Australia to 2025 passes Upper House by single vote
Posted by Marc Hendrickx at 1:06 PM No comments:

No mention by the ABC of news from Alice Springs about the administrative murder of a great Australian icon:

The reasons for the closures include wind, rain, storms or extreme temperatures, according to Parks Australia, the Federal instrumentality that manages the park. The climb is opened again when rangers deem it safe.

In January and February the climb was closed from 8am every day “due to heat” and longer on 52 of the 59 days in those two months.

A Parks spokeswoman says the climb is closed “for people’s safety” for the following reasons: If the temperature reaches 36 degrees or above; there is a greater than 20% chance of rain within three hours; there is a greater than 5% chance of thunderstorms within three hours; the estimated wind speed at the summit reaches 25 knots or above; more than 20% of the rock’s surface is wet after rain; cloud descends below the summit or for cultural reasons, for example, during a period of mourning.

The climb is now always closed at night, from about 5pm to 7am.

Posted by Marc Hendrickx at 8:43 AM No comments: