Got to give it to ABC's new CEO Michelle Guthrie, she's a much better poker player than Mark Scott or the bed wetting pansies who currently edit Quadrant Magazine and sit on its board. Her confected outrage at a hyperbolic satire by Quadrant's Roger Franklin, written in response to outrageous and erroneous claims about Islamic terrorists by soft headed Q and A panelists, has resulted in removal of the article and a grovelling apology from Editor in Chief Keith Windshuttle along with a sycophantic display by board member Nick Cater on ABC's the Drum.

Roger Franklin's piece (still available on the catallaxy blog) hammered home the ridiculous, ill informed opinions on radical Islam that appear all too regularly on the ABC's Q and A program, and go unchallenged by its muddle minded host Tony Jones. To self serving questions from the Australian Taliban David Hicks, giving a platform to Zaky Mallah who pleaded guilty to threatening to kill ASIO officers, and the outrageous notion that Islam is the most feminist religion, we can now add Q and A's view that refrigerators are more dangerous than Islamist terrorists.

Michelle Guthrie's complete over reaction to Franklin's article was designed to deflect criticism of long standing, incipient politically correct green-left group think, poor editorial judgements and lack of fact checking that characterises ABC's prominent current affairs and news platforms. In pointing out ABC's poor judgement and rank hypocrisy Quadrant's chief editor and its board members have absolutely nothing to apologise for.

Unfortunately the unnecessary apology and censorship have ripped a big hole in Quadrant's reputation as a champion of free speech.

Perhaps the board and chief editor can take time to read what the magazine stands for:

Quadrant is uncompromisingly in favour of freedom of thought and expression. While insisting on civilised discourse, it opposes any political, academic or religious tendency that wants to suppress freedom of speech. It does not support diversity for diversity’s sake nor does it mindlessly endorse tolerance of all viewpoints, especially those that do not return the compliment. Rather, it understands tolerance to mean the willingness to listen to unpopular or unorthodox views that are well argued, while in practice taking tolerance to mean the willingness to live and let live, which is so typical of Australian life.

[uhn-kom-pruh-mahy-zing]
1. not admitting of compromise or adjustment of differences; making no concessions; inaccessible to flexible bargaining; unyielding: an uncompromising attitude.
2. without reservation or exception; undeviating; absolute, as believing in or adhering to a principle, position, or the like: an uncompromising advocate for free speech.
Posted by Marc Hendrickx at 3:53 PM No comments:

Our list of ABC's missing climate news is now over 100 items long (this despite our extended WEB). To find out what you may have missed check out our Missing News page on the right. Or simply Click the link: MISSING NEWS.
Posted by Marc Hendrickx at 5:59 PM No comments:

Missing News: Their ABC, diverse views and the FOI Act

We last posted on missing news items on ABC in 2015. ABC's inherent Green-left bias means that any news item falling outside ABC's collective hive mind ends up classified as doubleplusungood, unfit for Australian consumption. Don't let the facts get in the way and spoil our alarmist fun.

In our absence from action a guest post at Catallaxy Files takes up the cudgel....
Their ABC, diverse views and the FOI Act
When is it OK for our national broadcaster to thumb its nose at its own code of practice?  The obvious answer is never, but we know it happens routinely.  So what can the common worker-drone do about it?  Not much, but we can at least try to use existing legislation to draw attention to the more egregious examples.
One such attempt is described here.  Settle back, this is lengthy.

With the ‘splodey-headed ABC-luvvies  fairly busy being maximally outraged by the US citizenry’s choice for their highest public office, it seemed a good time to try and sink the slipper into them over their second most-passionately held world view – our unfolding ”climate disaster” – and their deranged reporting of it.

Read on via the link above.

Posted by Marc Hendrickx at 5:42 PM No comments: 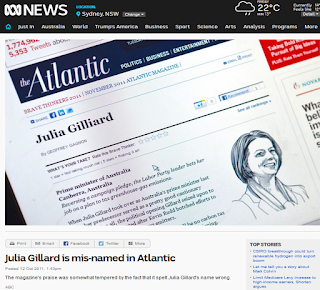 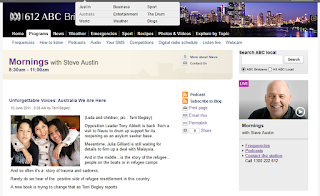 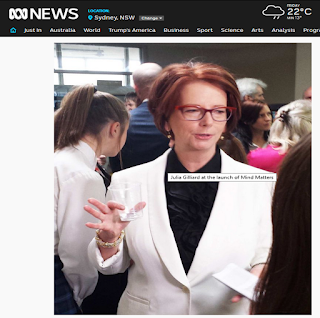 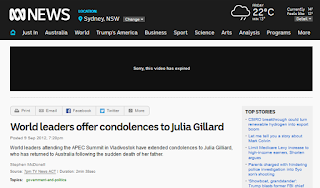 
Posted by Marc Hendrickx at 9:44 AM No comments: