ACM has some thoughts on our ABC under the banner ABC: institutionalised bias.
Recommended reading!

"The ABC has a statutory duty to ensure that the gathering and presentation of news and information is impartial according to the recognised standards of objective journalism." page 6

Of course when you hire activists for reporters those standards of objective journalism don't seem to matter that much.


Posted by Marc Hendrickx at 4:34 PM No comments:

Missing News 2: The Australian's Graham Lloyd reports "Climate claims on drought debunked". According to a paper published in Nature it seems that "DROUGHTS have not changed over the past 60 years and predictions that climate change will make them worse are exaggerated"
"Researchers from the US and Australia found models that had been developed to assess regional drought assistance were too simplistic to be used to predict the impact of climate change on drought."

Seems this news is too much for ABC's fragile audience to bear.
(Update...ABC play catch up.... Drought 'overestimated by faulty index'). Includes the classic line "But, as ever in climate change science, he acknowledges there are "huge question marks" over all of this."
And I thought it was all settled! As ever if you want Yesterday's news tomorrow you can turn to the ABC.

While on Climate models, here's another report missing from ABC. Seems along with droughts, they also don't do so well in simulating cloud cover:


Posted by Marc Hendrickx at 6:47 AM No comments: 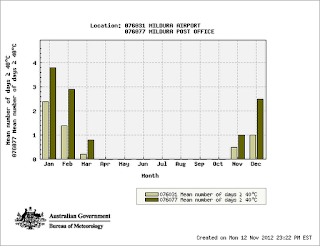 A data set of observed fire weather in Australia from 1973–2010 is analysed for trends using the McArthur Forest Fire Danger Index (FFDI). Annual cumulative FFDI, which integrates daily fire weather across the year, increased significantly at 16 of 38 stations. Annual 90th percentile FFDI increased significantly at 24 stations over the same period. None of the stations examined recorded a significant decrease in FFDI. There is an overall bias in the number of significant increases towards the southeast of the continent, while the largest trends occur in the interior of the continent and the smallest occur near the coast. The largest increases in seasonal FFDI occurred during spring and autumn, although with different spatial patterns, while summer recorded the fewest significant trends. These trends suggest increased fire weather conditions at many locations across Australia, due to both increased magnitude of FFDI and a lengthened fire season. Although these trends are consistent with projected impacts of climate change on FFDI, this study cannot separate the influence of climate change, if any, with that of natural variability.
Posted by Marc Hendrickx at 6:34 PM No comments:

Lies of the Climate Commission: Part 13

A quick note to add to the growing list of the Climate Commission's misrepresentations of climate science.

The Climate Commission's Will Steffen tells ABC's AM audience "Climate change was a factor in several aspects of Sandy."

Meanwhile The Australian's Graham Lloyd reports: "AUSTRALIA'S Climate Commission has misrepresented data from the leading US meteorological bureau to highlight a link between climate change and the severity of Superstorm Sandy which this week crippled New York."

1
: to give a false or misleading representation of usually with an intent to deceive or be unfair <misrepresented the facts>

More from that article...


...Dr Hoerling told US public radio in the aftermath of Sandy that ocean temperatures adjacent to the US eastern seaboard had been running several degrees higher than normal.
But he said the unusually warm waters were in areas where the background temperature was relatively cool. "So adding a few degrees Fahrenheit at that cool water temperature doesn't matter too much for the intensity of a hurricane," Dr Hoerling said.
Dr Hoerling is a research meteorologist, specialising in climate dynamics, in NOAA's Earth System Research Laboratory located in Boulder, Colorado.
He is chairman of the US CLIVAR (Climate Variability) research program, has served as editor of the American Meteorological Society's Journal of Climate, and has published more than 50 scientific papers dealing with climate variability and change.
Late yesterday, Professor England conceded the sea-surface temperature highlighted in the Climate Commission document was not significant.
Sadly incompetence from the government's climate commissioners is something we are becoming all to familiar with.