News from the Russian Front: truth hard to find in report of crop destruction 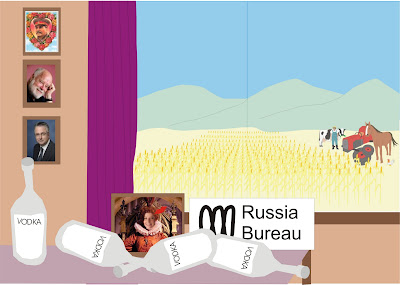 ABC rehash a Reuters report under the headline "Crops destroyed as Russia swelters in heatwave" News online 16 July. The report claims that: "Soaring temperatures across large swathes of Russia have destroyed nearly 10 million hectares of crops and prompted a state of emergency to be declared in 17 regions."
However a check of alternate news sources reveals conflicting factual information.
RIA Novostri the Russian International News Agency provide the following information in their report "Drought destroys 7% of Russia's grain crops" of the 14 July: "Drought has destroyed about 7% of crops in several major Russian grain-growing regions equal to an area of some 3.2 million hectares, the Agriculture Ministry said on Tuesday."
So is it 10 million hectares or 3.2 million?
In a report titled “Weather against harvest in Russia”, The Voice of Russia report that “A state of emergency has been declared in 14 regions, while 4 others are under consideration.” While in its report Russia Drought Hurts Half of Grains in Stricken Areas, Bloomberg mark the number of affected regions at 11:"Soil drought has affected more than half of grain plantings in 11 regions along the Volga". On the other hand RIA Novostri suggest 9: "The Russian Ministry of Agriculture says a state of emergency has been declared in nine agricultural areas."
So exactly how many regions are under a “State of Emergency” 17, 14, 11, 9?
The Gulf Times also credit Reuters in their story "Kremlin bids to tackle worst drought in decades". This report also suggests a drought affected area of about 9 million hectares but rather than "crop destruction" the Gulf Times indicates the grain has shrivelled: "The Russian Grain Union, an industry lobby, said the drought was Russia’s worst in 130 years and had already shrivelled grain on 9mn hectares - an area the size of Portugal and about one fifth of the total area sown for this year’s harvest.”
So, are we talking crop devastation , or a reduction in productivity?
ABC's coverage doesn't mention the effect of the drought on wheat prices but there are conflicting headlines here also:
Bloomberg: "Wheat Surges Most in 19 Months as Drought Hurts Russia Crop"
Commodity Online:  "Global wheat prices drop despite Russia drought"
So are prices on the way up or down?
The Gulf Times report (above) appears to have an expanded version of the Reuters story that includes this information:
“Similar weather conditions have occurred only five times - in 1919, 1920, 1936, 1938 and 1972 - since Russia started recording temperatures 130 years ago, said Valery Lukyanov, deputy head of Russia’s weather forecaster Roshydromet. This is the sixth year in history when late June and early July pose a real threat from the point of view of abnormal temperatures,” he told Reuters, adding that Moscow could set its own record if temperatures hit 37 degrees Celsius.”
Four of the five times occur prior to 1940!
So why did ABC leave these pertinent facts out of their report?
We wonder why the ABC has relied on apparently unreliable third party reporting to cover this story when it has its own reporter, in its own Bureau office in Russia. Just what is ABC's Russia correspondent up to? Attending Rock concerts perhaps?


Thank you for your email.
Your concerns of inaccuracy have been considered by Audience and Consumer Affairs, a unit separate to and independent from ABC program areas.
With regard to the statement in the ABC News Online story that “nearly 10 million hectares” of crops had been destroyed due to weather conditions, I would point out that the source you refer to - RIA Novostri -  has repeatedly reported this figure of 10 million hectares:
http://en.rian.ru/russia/20100803/160051126.html
http://en.rian.ru/russia/20100721/159893787.html
http://en.rian.ru/russia/20100723/159916359.html
http://en.rian.ru/business/20100802/160039288.html
The figure of 10 million hectares has also been widely reported by a range of media sources including Reuters, Bloomberg and Agence France-Presse.  Further, I note that the figure of 3.2 million hectares which you quote refers specifically to “several major Russian grain-growing regions”; not all crops lost.
With regard to the Voice of Russia report you refer to, and that a state of emergency had been declared in 14 states, with another 4 under consideration, I would point out that this story is dated 13 July; the ABC story from Reuters is dated 16 July.  As I hope you will appreciate, this was a developing story and facts – such as the number of regions declared in this state of emergency -  changed over time.
Your comments regarding the Gulf Times story are noted.  It has been widely reported that the crops were destroyed – indeed, the Gulf Times report you refer to makes this clear in its introduction.
Audience and Consumer Affairs can find no evidence to suggest that the report “Crops destroyed as Russia Swelters in Heatwave” has not met the ABC’s accuracy provisions.   For your reference, a copy of the ABC Code of Practice is available
at: http://www.abc.net.au/corp/pubs/documents/200806_codeofpractice-revised_2008.pdf.

Yours sincerely
Audience & Consumer Affairs
Posted by Marc Hendrickx at 12:05 AM