Can check the tread but not the nuts 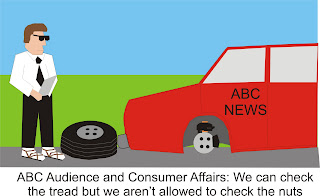 COMMENT: ABC audience and consumer affairs have provided the response below in relation to concerns we raised about the dramatic decline in ABC News productivity. It appears they can check the tread (leaving many bald tires to pass) but can't check the nuts. We still await a reply from the Minister.

Received July 5, 2010
Thank you for your emails of 25 June and 2 July.
As previously explained in our correspondence to you, Audience and Consumer Affairs can only engage in detail with your concerns to the extent that they raise specific issues about particular items of ABC content, and their compliance with the ABC's Editorial Policies and Code of Practice.  If you have concerns about a specific ABC broadcast, we will review your concerns and respond as appropriate.  Audience and Consumer Affairs does not investigate claims made in external blogs or other media about the ABC.
Nonetheless, your comments are noted.
Yours sincerely
Audience & Consumer Affairs
Posted by Marc Hendrickx at 7:39 AM