ABC 24 hour news-what can you expect

COMMENT: As part of our Productivity Survey we have had a quick look at ABC's productivity over the day. We collected data from the last 5 weekdays of June 2010 and looked at the time stories were posted to ABC's News Online website. The results are shown in the figure below. Over 80% of stories are posted between 6 am and 6 pm,with just 17.6% posted over the remaining 12 hours.
ABC were recently criticised for dropping the ball on the ALP's take down of Prime Minister Kevin Rudd, seemingly being so inflexible that they couldn't break into normal programming to report on events as they were happening in real time.
The breakdown of ABC's current performance (see chart below) suggests ABC is currently incapable of covering stories outside normal office hours on a continual basis without a drop in productivity elsewhere.
Based on these results we predict that the bulk of content on ABC's 24 hour news channel will be recycled news stories posted earlier in the day.
So why should Tax payers fork out funds for a service already undertaken satisfactorily by the private sector? Foisting a 24 Hour News Channel on an organisation that is already under-performing, an organisation producing less reports with more staff, just means ABC's news coverage ends up being even more mediocre. Rather than wasting money on a mediocre 24 hour news channel ABC could use tax payer money better if it simply covered important events as they happen. It clearly missed an opportunity to do so with Kevin Rudd's demise as PM 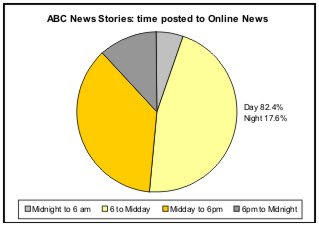