Lies of the Climate Commission: Part 3 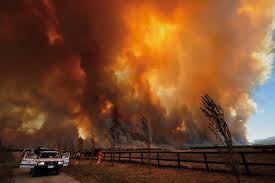 On  page 40 of its report (The Critical Decade) the climate commission, states that 'The intensity and seasonality of large bushfires in southeast Australia appears to be changing, with climate change a possible contributing factor (Cai et al. 2009c)."

Crompton is joint author of an important study the ABC did not feel newsworthy. This study, omitted from the report by the Climate Commission (whose commissioners can not be relied upon for accurate information about climate science-see Part 1.), found that "that there is no discernable evidence that normalized building damage is being influenced by climate change due to the emission of greenhouse gases". The study remains unreported by the ABC. Its authors recently comprehensively smacked down critics of the study in the peer reviewed press.
Crompton's post deals with the use of (Cai et al, 2009) as a supporting reference for the statement made by our climate commission:
My main issue is the report’s use of a key reference, the study by Cai et al. (2009c) entitled “Positive Indian Ocean dipole events precondition southeast Australia bushfires”, to support the statement that


“the intensity and seasonality of large bushfires in southeast Australia appears to be changing, with climate change a possible contributing factor”

While I have no issue with the Cai et al. study itself (we cited this in our recent bushfire paper), at best, the use of it in the Commission’s report is clumsy, and at worst, misleading.

Crompton goes on to state:
If instead the statement in the report was referring to impacts, then why was the conclusion from our research not cited here – that there is "no discernable evidence that the normalized Australian bushfire building damage (1925-2009) is being influenced by climate change due to the emission of greenhouse gases"(PDF)?
Concluding:
In sum, as far as the bushfire sub-section of the Climate Commission’s report is concerned, it seems that both accuracy and clarity have been sacrificed for economy. And that, unfortunately, will always do far more harm than good.
Read the whole post at Roger' blog. This seems newsworthy, will ABC report it?
Posted by Marc Hendrickx at 7:37 AM