In its report The Critical Decade, the Australian government's Climate Commissioners state (on page 27):
Increasing acidity in tropical ocean surface waters is already affecting coral growth; calcification rates have dropped by about 15% over the past two decades.
Seems pretty frightening. The maximum rate of loss based on the graph in Figure 19a on page 30 of the commissions report is about -0.014 units per year (between 1994 and 2005 - see Figure 19a below which is based on Death et al., 2009). 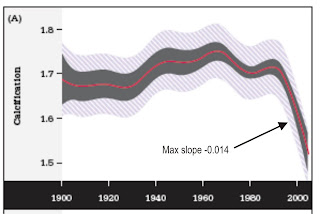 Figure 19a - Variation of (a) calcification (grams per square centimetre per Year).
(That shape sure looks familiar)
About the Death et a 2009 study the commission state: "The observational study was carried out using 328 sites on 69 reefs and showed a precipitous drop in calcification rate, linear extension and coral density, all indicators of coral growth, in the last 15-20 years of a 400-year record (Figure 19)." Hang on this graph only shows the last 100 years, what about the last 400? 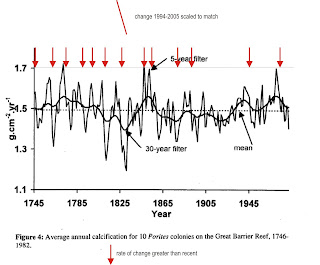 Figure 4. from Lough and Barnes 1997. The raw data incorporated into Death et al. 2009 (see their figure 2 but without the high degree of smoothing that masks the short term variation-this relevant given the short time frame used by the commission to score a political point.) The drammatic change from 1994-2005 used by the climate commission to present a case of alarm is shown as the red line scaled to match this graph at the top, as are intervals where the rate is about equal to, or exceeded by historical data (red arrows) based on the 5 year filter.


The last 15 years does indeed show a "precipitous drop" however looking at the longer term, similar "drops" appear at least 13 times over the last 4 centuries. When placed in its historical context, the commission's case for alarm vanishes into thin air.

The Climate Commission, who judge climate in in 30 year slices, didn't bother looking past the last "two decades" to reach their alarming conclusions on calcification rates. Someone appears to be confusing the weather for climate.

The commission further mislead the public with their mis-representation of climate science and make a mockery of the commission's task to: Explain the science of climate change and the impacts on Australia.
The ABC continue to let this pass without in-depth investigation, to the great detriment of its audience. Having its reporters "embedded" in the commission does not appear to be a good starting point, and appears somewhat at odds with the ABC's task of providing News that is impartial and free of personal bias.
Posted by Marc Hendrickx at 9:12 AM