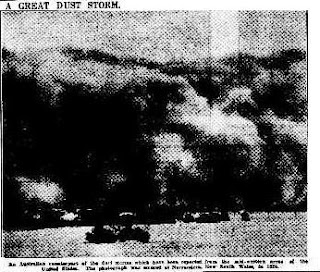 A Great Dust Storm
In late September 2010, ABC reported that an Australian dust storm could be weeks away. Let's once again re-visit the forecast made in the original article:
"Professor De Deckker says he expects another major storm will develop after the flooded inland of Australia dries during spring.
"You had major floods in Central Australia and I think in the near future, when the material that covers the landscape - especially the lake floors and river banks - when that dries up, the wind will pick it up and lift some of the material to our eastern seashores," he said.
"So it is likely to be this spring, but more likely in early autumn."

Turns out there were no dust storms in Spring. None in Summer, in fact the 2010-2011 summer was the second wettest on record. There were no dust storms in early Autumn. None have been reported thus far in late Autumn and winter fast approaches. There has yet to be a large dust storm covered by ABC news since this prediction was made last September. Turns out this prediction was bulldust!

Will ABC now balance its news coverage by reporting on the spectacular failure of this prediction? Why did ANU's Professor Patrick De Deckker get it so wrong on this occasion, and where is the good professor's media release explaining why? Help bring this dust babbler to account.
Update: ABC provide this unsatisfactory response (Received 20/5/2011):


The story you refer to was one of the stories we ran around the time of the first anniversary of the dust storms of 2009.
Here is another example - http://abc.net.au/news/stories/2010/09/23/3019591.htm
These stories were all legitimate at  the time, and those quoted publicly in them are entitled to be judged on the wisdom of their comments. However, the ABC does not necessarily follow up and critique each and every statement made by people legitimately quoted in News stories.
Regards,
Alan Sunderland Head of Policy & Staff DevelopmentABC News
Our response:
Dear Alan,
Thanks for the response. You miss the point Alan, I'm not saying the report wasn't newsworthy.  Equally newsworthy is the fact this expert go it very wrong and it' s not like ABC with over 950 staff in news doesn't have the resources to follow it up.

The willful blindness of the media in not reporting failed predictions is nicely dealt with in Dan Gardner's new book Future Babble.
Posted by Marc Hendrickx at 12:02 PM