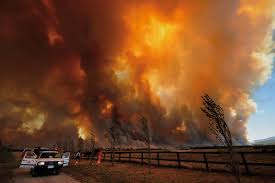 Nothing on ABC thus far about a new study that busts the widely promulgated myth that the disastrous 2009 Victorian Bushfires were caused by man made global warming. This one however will be hard to ignore the Abstract states:

This study re-evaluates the history of building damage and loss of life due to bushfire (wildfire) in Australia since 1925 in light of the 2009 Black Saturday fires in Victoria in which 173 people lost their lives and 2,298 homes were destroyed along with many other structures. Historical records are normalised in order to estimate building damage and fatalities had events occurred under the societal conditions of 2008/09. There are relationships between normalised building damage and the El Niño-Southern Oscillation and Indian Ocean Dipole phenomena, but there is no discernable evidence that the normalised data is being influenced by climate change due to the emission of greenhouse gases. The 2009 Black Saturday fires rank second in terms of normalised fatalities and fourth in terms of normalised building damage. The public safety concern is that of the 10 years with the highest normalised building damage the 2008/09 bushfire season ranks third, to the 1925/26 and 1938/39 seasons, in terms of the ratio of normalised fatalities to building damage. A feature of the building damage in the 2009 Black Saturday fires in some of the most affected towns – Marysville and Kinglake – is the large proportion of buildings destroyed either within bushland or at very small distances from it (<10 m). Land use planning policies in bushfire-prone parts of this country that allow such development increase the risk that bushfires pose to the public and the built environment.

Crompton, R. P., K. J. McAneney, K. Chen, R. A. Pielke Jr., and K. Haynes, 2010 (in press): Influence of Location, Population and Climate on Building Damage and Fatalities due to Australian Bushfire: 1925-2009. Weather, Climate, and Society.More at Roger Pielke Jnr
Instead of reporting on this important study ABC promote alarm with this misleading headline"UN climate scientists link Russia, Pakistan calamities". The necessary studies have not even been undertaken. Talk about jumping the gun

Posted by Marc Hendrickx at 8:08 AM