NEWSFLASH. ABC will shortly be posting a media release about the results of the Independent Complaints Review Panel's deliberations on our complaint about an ABC News report "Australian Uranium dust found in Antarctica".  ABC require confirmation that complainants have received a copy of the complaint prior to its formal release of the report on the ABC website. Here's a copy of a letter sent to Mark Scott ABC Managing Director. The complaint was not upheld, we assume the full ICRP report will be available from the ABC soon, in the meantime a scanned copy is reproduced below.
RE: ICRP Report: Uranium.
Dear Mr Scott,
Just a short note to inform you I have received your letter of the 13 September relating to the ICRP report about ABC News Online story “Australia Uranium Dust found in Antarctic Ice”.
I note it its comments to the ICRP, ABC News state:
“It is not normal or appropriate practice when new scientific research is reported to immediately seek political responses to it. It would be the case if the original story had a particularly strong political or policy impact, but in cases like this it was sufficient to simply factually report the original research.”
It is surprising that ABC NEWS still do not see the political implications of the story. If low levels of uranium dust from Australia have been found in Antarctica what would this say about the possibility of higher levels of contamination closer to home? That ABC News did not take the opportunity to scrutinise the original claims (none of which are peer reviewed) or interview representatives of the Australian Uranium industry or government officials to clarify this possibility, does not do much for ABC News’ reputation.
ICRP claim ministerial correspondence I sought has not been made public. This is incorrect. The correspondence was published on ABC NEWS WATCH the 6 July 2010. This includes the following statement that ABC NEWS somehow feel is not newsworthy or relevant to the story:
"News reports that uranium dust from Australia was found in an ice core from the Antarctic Peninsula arise from an unpublished study by scientists from Chile, the United States and Brazil. The data were presented at conferences in Punta Arenas, Chile in October 2009 and in Maine, the United States in May 2010.
Data from the World Nuclear Association indicates that in 1995 there was a marked increase in uranium production worldwide. The above mentioned study did not involve fingerprinting or source analysis of the uranium dust, consequently there is no evidence of an Australian source for the dust."
I am happy for you to issue the press release.
Earlier posts:
Updated: Uranium from Uranus-Minister's reply 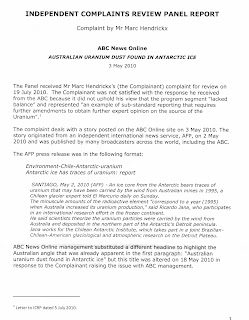 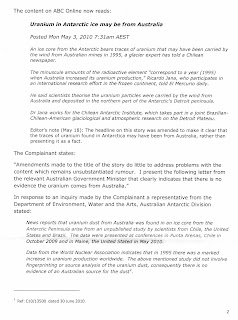 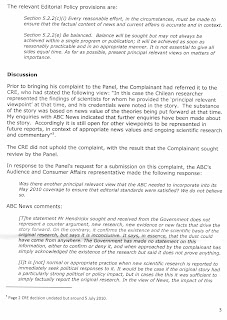 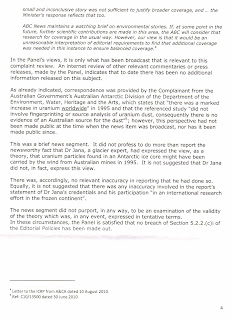 Posted by Marc Hendrickx at 8:04 AM