ABC have replied to our complaint about a story originally headlined "Australian uranium dust found in Antarctic ice". ABC have now rephrased the headline "Uranium in Antarctic ice may be from Australia" and added the following editorial note:
Editor's note (May 18): The headline on this story was amended to make it clear that the traces of uranium found in Antarctica may have been from Australia, rather than presenting it as a fact.
ABC, however embarrass themselves by not spending any further time conducting simple inquiries that quickly demonstrate the baseless nature of the claims. The facts are that Australia's Uranium mining industry in among the most highly regulated in the world with strict environmental controls that monitor mines for any pollution. In their original story ABC report that the minuscule amounts of the radioactive element "correspond to a year (1995) when Australia increased its uranium production," Ricardo Jana, who participates in an international research effort in the frozen continent, told El Mercurio daily." ABC's report states "An ice core from the Antarctic bears traces of uranium that may have been carried by the wind from Australian mines in 1995, a glacier expert has told a Chilean newspaper."
Here's a graph of Australia's production of yellowcake from the Australian Parliamentary Library 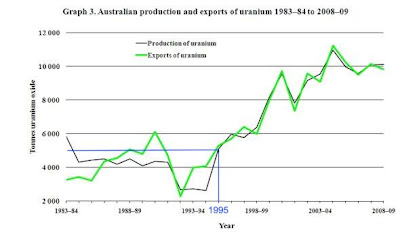 Production in 1995 at about 5000t is less than 1983 (about 6000t). Why were no "uranium particles" detected in 1983, wind not blowing the right way perhaps?  The other problem is that Australia does not produce Uranium. It produces Uranium Oxide, a compound of uranium.
This story even corrected remains a load of nonsense!
ABC's reply is posted below and our request for further action on this woeful piece of reporting is posted below that.
From ABC Audience and consumer affairs received 6 June 2010.
Thank you for your email regarding ABC News Online.
Yours concerns of inaccuracy and a lack of balance have been referred to Audience and Consumer Affairs for review.  The unit is separate to and independent from ABC program areas.
On review, ABC News accepts that the headline to the report in question overstated the certainty that uranium dust found in Antarctica came from Australia. The headline has been changed to ‘Uranium in Antarctic ice may be from Australia’,  and an editor’s note has been appended to the story:   http://www.abc.net.au/news/stories/2010/05/03/2888354.htm  The headline did not meet the ABC’s standards for accuracy in news and current affairs content.
However, we are satisfied that the story was in keeping with the ABC’s standards for balance.  It was a brief news story reporting the findings of  scientists from the Chilean Antarctic Institute that uranium found in Antarctic dust may be from Australia; as such it reported the views from Dr Ricardo Jana.    We do not believe that further perspectives were required to be included in order to meet the requirements of the ABC’s Editorial Policies; Dr Jana was the principal relevant viewpoint on the subject to hand.
For your reference, the ABC’s Code of Practice is available at:  http://www.abc.net.au/corp/pubs/documents/200806_codeofpractice-revised_2008.pdf
Yours sincerely
Audience & Consumer Affairs
Our reply...
Dear ABC Audience and Consumer Affairs,
I am not satisfied with ABC's reply.
Firstly a simple check by ABC would find that Australia does not actually produce any elemental Uranium, it produces and exports Uranium Oxide, more commonly known as Yellow cake (see http://www.aph.gov.au/library/pubs/rp/2009-10/10rp06.htm) . ABC's story mentions "miniscule amounts of the radioactive element" (key word element) and ABC's "expert"  - a glacial scientist talks of "uranium particles". Yellowcake is a compound of Uranium, it is not an "element".  Particles of Yellowcake are a mix of oxygen and uranium. I repeat the "expert" does not mention particles of uranium tied to oxygen, clearly he refers to elemental uranium "uranium particles", which as stated Australia does NOT produce.
Secondly, Australia's Uranium mining industry in among the most highly regulated in the world with strict environmental controls that monitor mines for any pollution. ABC did not bother to check with the Office of the supervising scientist or the Uranium industry for comment. As a geologist I can state the odds of that uranium coming from Australian Uranium mines are as likely as it coming from Uranus.
As originally stated the story has no factual basis and lacks balance.  The allegations are actually quite serious and amount to Australia polluting Antarctica which is at odds with its commitments to international agreements.  As such ABC should have spent more time researching this. It is disappointing to see an organisation that supposedly prides itself on quality journalism let a story this poorly researched slip through and be published.
I request the ABC either spend more time on this story to establish the facts and add some balance (including issues raised in our original complaint that indicate Uranium is mined in nearby Chile and Argentina), or remove the story from the website.
If you feel ABC Audience and Consumer Affairs have nothing further to add, please pass this complaint on to the ABCs Complaint Review Executive. We have included them in this email.
Posted by Marc Hendrickx at 12:05 AM