An alarming trend has appeared in our survey of ABC News productivity. With June just past the half way mark ABC News output is at record lows (see chart below), and our earlier predictions that ABC will have zero weekday news output by 2067 look a little optimistic. Based on the current 2010 data ABC News will in fact reach zero output in 2035! This is a full 32 years earlier than previously predicted.  The models now indicate a clear link between increases in ABC news staff and falling ABC News output. The only way to reverse the trend is for a reduction in ABC News staff numbers to at least pre-2003 levels.
Returning ABC News productivity represents the greatest moral challenge our nation has faced.
In order to undertake this great moral challenge we propose initiating an ABC Corporate-wide Personnel Retirement Scheme or CPRS. There is no other way to return productivity to previous levels, and based on the trends we must act now and act fast. The CPRS will begin the process of reducing alarming ABC News staff numbers and help prepare all Australians for a future in which there will be zero ABC News output.  A CPRS levy will need to be placed on the Australian public to help fund the retirement packages of ABC news staff. However the public can help in other ways; for instance by reducing their consumption of ABC content. More sustainable alternate sources of news are available.
An ABC free lifestyle is attainable, and based on the long terms trends this is something we will all need to get used to eventually if ABC News productivity continues to plummet. Know that the earlier we prepare the better off we will be. 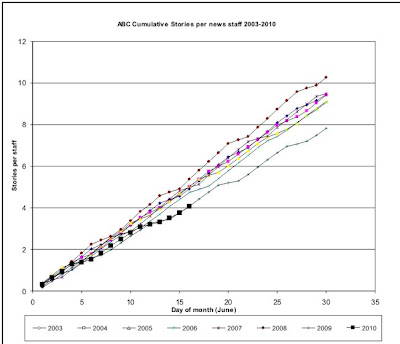 Note that the figures are actually worse than presented as we have not adjusted for actual 2010 staff numbers. These numbers will be available later in the year when ABC releases its annual report. We will update the charts and predictions to take actual staff numbers into account when this is available. It looks grim.
Posted by Marc Hendrickx at 3:46 PM