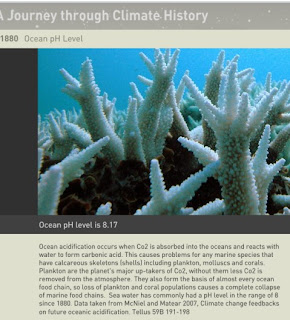 Cobalt. According to ABC the cause of Ocean Acidification
ABC have indicated they will not adjudicate on our complaint about the 30 additional errors in its presentation "A journey through climate history". They did indicate that the list was passed onto the editorial team whom we hope will be busy making corrections.


Audience & Consumer Affairs (A&CA) have reaffirmed that they will not accept your complaint for review, given:
-          the considerable resources already spent on dealing with your complaints about this item
-          the significant lapse of time since the item was researched, compiled and published; and
-          the nature of your most recent complaint does not merit further commitment of A&CA investigative resources.
However, your comments have been relayed to the relevant editorial team for their information.
Accordingly, in the absence of a new investigation by A&CA - a decision clearly based on the provisions of the ABC’s Editorial Policies and supported by the Complaints Review Executive (CRE) - there is no further reason for the CRE to respond.

To which we replied:
Thanks for your reply. As previously stated, given the seriousness of the errors and possibility that the presentation will mislead and misinform ABC's Audience, I will take the matter up with the relevant minister and opposition spokesperson. Again, I find it surprising that ABC will not take the opportunity to make the corrections. You may recall I pointed out in my first compliant that the presentation should be subject to an extensive review and it is disappointing that ABC have never taken the opportunity to carry one out. Of course had the necessary resources been expended conducting a proper review of the production prior to publication we would not be having this exchange.

We have sent a letter to the Minister for Communications. Here's an extract.
"Given the seriousness of the errors and possibility that the presentation will mislead and misinform ABC's Audience, including school students I find it surprising that ABC will not take the opportunity to make the corrections.

My simple request is that if ABC wish to continue to promote the presentation it make the simple corrections required. Can you as Minister please ensure ABC make the necessary changes."
Posted by Marc Hendrickx at 3:05 PM

Email ThisBlogThis!Share to TwitterShare to FacebookShare to Pinterest
Labels: timeline