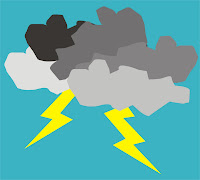 ABC HEADLINE:  "Qld facing severe storm season" News online 21 September 2010
ABC REPORTED: ABC reported on comments made by Queensland's Emergency Services Minister Neil Roberts who says "long-term weather forecasts show the state could be facing its worst storm season in years."
THE COMPLAINT: Can ABC clarify which long term forecasts were being referred to? Why didn't ABC's reporter ask the question?
A quick check of the BOM website indicates this years forecast are yet to be released:

Email ThisBlogThis!Share to TwitterShare to FacebookShare to Pinterest
Labels: forecasts