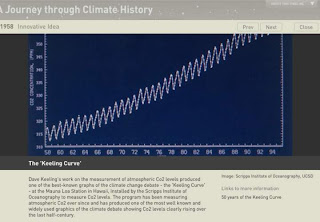 ABC claim the Keeling Curve is a measure of atmospheric Cobalt!
Groupthink, Sensationalism, Naive and Inept Journalism: Climate coverage at the ABC.
Part 4 Making Mistakes
Last of a four part series looking at climate reporting at the ABC.
Proving bias and lack of balance is a difficult proposition when the goal posts are constantly shifted by ABC’s complaints department; however demonstrating basic errors of fact is less open to interpretation and hence easier to prove.
A Climate Time Lie
To coincide with the Copenhagen Climate Conference in December 2009 ABC Online released "A Journey through climate history". This glitzy presentation was "developed to show key events in the climatic history of the planet". The presentation was promoted heavily on ABC’s News home page and still features prominently. It was produced in-house with some unspecified involvement from the Climate Change Research Centre (CCRC) at the University of New South Wales.
13 basic scientific errors were identified in the presentation along with numerous mistakes that suggested a review of the content was warranted. ABC made 7 corrections to the presentation. A subsequent Independent Complaints Review Panel report found against claims of bias on a number of the timeline pages. An independent review of the content was never undertaken and now 30 additional errors have been identified and raised with the ABC for action. The most telling of these probably being ABC’s (and presumably the CCRC’s) confusion between the chemical symbols for Cobalt (Co) and Carbon Dioxide (CO2). Hence in its defective timeline ABC blame Cobalt for ocean acidification, the enhanced greenhouse effect and suggest the world is endeavouring to sequester Cobalt underground. It also seems the Keeling curve is not a measure of carbon dioxide but of the rare Cobalt compound Co2 (see screenshot above)! One hopes no schools are using the timeline, lest a generation be mislead over the chemistry of Cobalt. There is also confusion between paleoanthropologists and archaeologists; confusion between the roles of geology and archaeology; along with software glitches that reveal an infinitely old universe, and numerous spelling and grammatical mistakes. "Riddled with errors" is an understatement.
ABC NEWS WATCH posts on ABC’s Journey through climate history can be found at A Climate Time Lie.
Polar Bear Cannibalism: ABC provides a correction 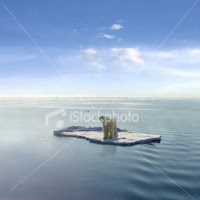 istockphoto's faked polar bear-someone else's mistake
ABC HEADLINE: "Climate change driving polar bears to cannibalism"
ABC REPORTED: The report claimed climate change is driving polar bears to cannibalism based on reports from un-mentioned scientists.
THE COMPLAINT: A very quick web search of peer reviewed science reveals that cannibalism is normal among polar bears and is not due to global warming. In fact it can be associated with increased numbers of bears putting pressure on the food supply. Please issue a correction of this report that gives a false impression of the reasons for cannibalism among polar bears.
This was a piece of reporting so bad it required ABC editors two bites of the cherry to repair. ABC issued this advice: On December 5, in an article about the melting of Hudson Bay sea ice in Canada, the ABC used the heading that climate change was “driving polar bears to cannibalism”. The story explained that the sea ice which the bears need to walk across when hunting, was not appearing until weeks later than usual. This means the bears had a shortage of food and there had been cases reported of the bears eating cubs for food. The ABC acknowledges that polar bears are not necessarily driven towards cannibalism because of climate change; this claim should have been attributed to conservationists. The heading has been changed to: “Climate change drives polar bears to cannibalism, conservationists say”. Also, the story did not include sufficient balance and reaction of an Inuit spokesman to the cannibalism claims was added to the story.
The editorial notes at the end of the current version read:
Editor's note (December 23): The headline on this story has been changed to make it clear that conservationists are saying climate change is driving polar bears to cannibalism. On February 9, the reaction of an Inuit spokesman to the cannibalism claims was added to the story.
Here’s how a professional news organisation covered the story:
Climate change ‘ forcing polar bears to become cannibals’
But Inuit leaders have dismissed the idea, saying that it is a normal occurrence totally unconnected with global warming.
Still it’s not as bad as a report on a heatwave in Rio that was so bad ABC expurgated it in its entirety from the ABC News Archive.
Kingsley Amis stated “Laziness has become the chief characteristic of journalism, displacing incompetence”. It’s vice-versa at the ABC.
Conclusion
In summary, yes Auntie’s climate change coverage has been biased, but the evidence does not support Clive Hamilton’s claims of a right wing conspiracy, just bias born from plain old fashioned sensationalism, naivety and incompetence, skewed by ABC’s Groupthink culture that misrepresents the scientific debate about climate change. We expect more from the ABC because they have sold themselves as Australia’s premier news service; however increasingly it seems the product is failing to live up to the sales pitch.


The complete essay now available HERE
Posted by Marc Hendrickx at 12:05 AM