COMMENT: We received the following letter from the Department of Broadband, Communications and the Digital Economy confirming ABC's chamber of secrets remains locked from public scrutiny thanks to current FOI legislation. This followed our request to obtain "correspondence, electronic (emails) and otherwise in connection to the production of the ABC website " A journey through Climate History", including commissioning instructions and comments on initial versions." See "FOI request for climate time line emails-request denied."
Based on replies to our complaints so far, it is clear that ABC's self regulation is failing and ABC is suffering from a severe case of "confirmation bias" especially in its reporting on climate change. Opening that box of secrets will require a change in legislation. ABC NEWSWATCH will lobby parliament for the necessary changes that will see proper scrutiny of the way ABC expends public resources. 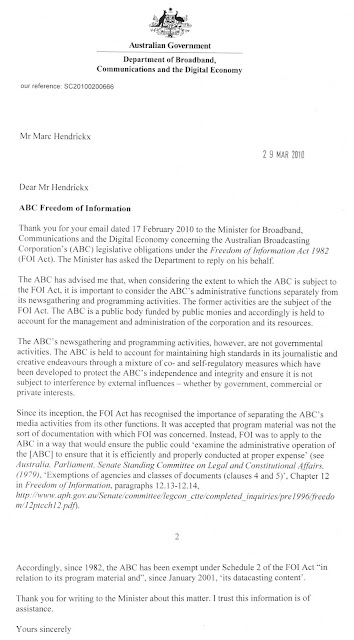 Posted by Marc Hendrickx at 5:30 AM

Email ThisBlogThis!Share to TwitterShare to FacebookShare to Pinterest
Labels: FOI