Best of ABC? Would you like some "climate propaganda" with your raw prawn?

COMMENT: So what's "Best of the ABC" this week? Perhaps an interview with Dr Roy Spencer about new developments in climate science that indicate climate sensitivity has been over estimated by the IPCC leaving their models and the "climate crisis" without a leg to stand on? Oh that's right ABC have thus far failed to report on it. Instead our national broadcaster uses tax payer funds to feed us some more "climate propaganda".
Best of ABC: In this case, sure to leave you feeling like you've eaten a raw prawn left baking out in the hot sun too long. 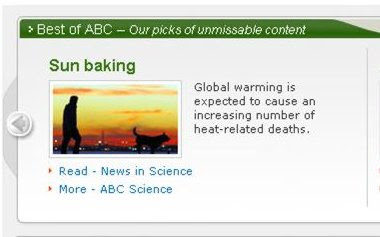