A small victory for common sense in regard to spurious temperature claims made earlier this year. (See Part 1, 2, 3, and 4.) We note the following note has been added to the story at the AM website:

*EDITOR'S NOTE: (6 March 2012): The original broadcast item suggested that it was the hottest start to 2012 for the entire state. In fact, more of the state, particularly outside Adelaide, was affected by record high temperatures in 1960. The transcript has been amended.

The amended line reads:  "Parts of South Australia are sweltering with their hottest start to the year in more than a century.*" But we know that is not what was stated. This odd re-writing of the transcript by ABC's "Ministry of Truth" is too close to 1984 for comfort. Why not just add the asterix to the line in contention and state they made an error? 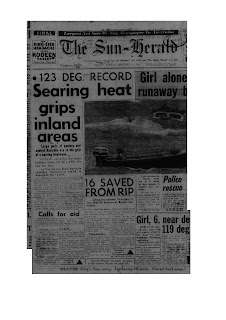 Alan Sunderland Head of Policy & Staff Development, ABC News,  provides the following additional information (our comments in bold):
Received 6/3/2012
Dear Mr Hendrickx,
Apologies for my reply earlier today.
I assumed that your decision to refer a matter to ACMA related to the current complaint we had been discussing recently, as my eye was caught by the identical first two words in the tag line in the subject header (factual inaccuracy). I did not read down and realise that it related to a separate earlier complaint of yours. (ed: that's this ONE about missing historical information from a story about inundation of islands in the Torres Strait).
So, to clarify the situation:-
1. In relation to the World Today story of 16th January relating to encroaching seas in the Torres Strait, I don’t have anything further to usefully add to our original response, so it is appropriate for you to pursue the matter with ACMA if you remain dissatisfied (ed post on this in the near future).
2. In relation to the AM story of 3rd January relating to temperatures in South Australia, I have now heard back from the reporter. As you know, the original report claimed that “South Australia is sweltering with the hottest start to the year in more than a century.” When your original complaint was passed on to the program team, they relied on information relating to Adelaide temperatures to support that statement, and you responded by providing information relating to temperatures across the entire state. I do believe there is an argument that can be mounted that it is more relevant in the circumstances of this story to judge the accuracy of the remark by reference to the impact on population rather than the geographic spread. In other words, it would appear on the basis of the official data that more of the South Australian population was affected by the high temperatures in 2012 than were affected in 1960, even allowing for population growth in the intervening period (ed this is based on my very rudimentary analysis -see part 2, that only included data from stations with readings for 1960 and 2012. A more detailed analysis that included more stations across the state from both time periods would be warranted before this conclusion could be stated with any degree of confidence). My reason for delaying my response to you was to check back once again on the basis the program team had at the time to support the claim made in the story, rather than any subsequent reasoning. It now appears, having heard back from the program team, that they were simply relying on information provided to them by a range of sources, but they did not formally confirm that with official and reliable statistics. Under those circumstances, I think the information contained in the program is sufficiently broad and vague that it should be corrected through the addition of an Editor’s Note. In short, it was incorrect to describe it as “the hottest start to the year in more than a century” without further explanation, as 1960 was indeed hotter if you measure it in terms of how much of the state had record’s temperatures rather than in terms of how much of the state’s population experienced those record temperatures.
So an Editor’s Note will be added to the story online.
Regards,
Alan Sunderland
Score +1
Posted by Marc Hendrickx at 6:46 PM