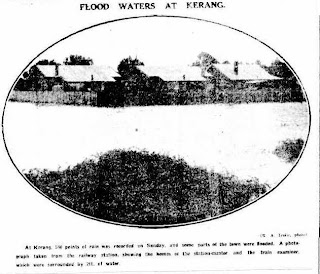 The Argus (Melbourne, Vic. : 1848-1954), Thursday 25 March 1926, page 9
ABC Report: "Kerang and Warracknabeal are in uncharted territory, with floods like this never seen since European settlement. A lack of historical data is causing difficulties for authorities, unable to pinpoint the timing of record flows in at-risk towns."

Warracknabeal: Great Flood at Warracknabeal, the township under water (from The Argus Thursday 11 October 1894) Warracknabeal is today under water, having been visited by the greatest flood known here since 1870.
Or August 1909 (from The Advertiser Tuesday 24 August 1909) The streets of Warracknabeal are still under water, and hundreds of families are unable to get into their houses. Fourteen families were accommodated at the hospital last night, and others found shelter in the shire hall, the railway-station, and the hotels. The residence of Mr. John Smith has collapsed, the foundations having been washed clean away, while other buildings are tottering.
ABC report in January 2011 "the levee protecting Warracknabeal appears to be holding up."

Warracknabeal, Victoria, Aug 1909-Victoria Museum
Kerang: (from The Sydney Morning Herald Wednesday 25 August 1909) The Loddon flood waters broke through the levees at Kerang last night, inundating mostof the town, and all business was suspendedThousands of acres are submerged, and farm-ers are leaving their homes in all directions.
ABC report in January 2011 "The SES is optimistic Kerang in northern Victoria will not be flooded, but warns the town could be isolated for days."
Here's a few more articles:
Floods in the Loddon, Kerang The Argus Thursday 22 June 1893
Floods at Kerang The Argus Wednesday 28 September 1921
Floods at Kerang The Argus Wednesday 13 December 1933
In this age of point and click, with references at your finger tips 24-7-365 ABC's reporting once again fails the test with history once again forgotten. The only thing unprecedented about the floods is ABC's abysmal reporting.
Posted by Marc Hendrickx at 8:20 PM