Our thoughts with Queenslanders as they face the current flood crisis.
The BOM has a summary of flooding in the Brisbane area under the title "KNOWN FLOODS IN THE BRISBANE & BREMER RIVER BASIN" that includes graphs of flood peaks for the Brisbane and Bremer Rivers (below) and a summary of observations dating back to the 1800s that might be of interest.
ABC report:
The Brisbane River is predicted to reach 3 metres tonight, 4.5 metres tomorrow, and by Thursday it is expected to rise above the 1974 peak of 5.45 metres.

The Bremer River at Ipswich is now expected to reach 22 metres tomorrow morning - 1.5 metres above the 1974 level.
UPDATE 12/1/2011-ABC now report: Ipswich is being swamped this morning - the Bremer River there is now expected to peak today at 20.5 metres, slightly lower than the devastating 1974 floods. In Brisbane...The waters are then expected to peak again at about 5.5 metres at about 4:00am AEST on Thursday morning and stay high until Saturday.
UPDATE 12/1/2011 7:30pm-ABC now report:The Bremer River is set to peak at 19.5 metres later this evening. Ipswich Mayor Paul Pisasale says earlier predictions suggested the river would reach 22 metres."That's three metres less and it's that three metres that would have caused a drastic situation," he said.
UPDATE 13/1/2011 6:00am-ABC now report: The (Brisbane) river is now expected to reach 4.6 metres, almost a metre lower than the historic flood of 1974.

The current floods are likely to be the second (or third) worst on record. The record floods of Feb 1893 resulted in the following headline in the Courier Mail: 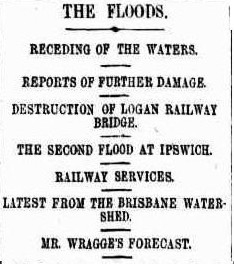 The full article available HERE. The Queensland Government has launched an appeal to help those affected by the recent floods. To donate follow the links from the QLD government home page (www.qld.gov.au).
Update 11pm..ignoring the history outlined above by the BOM ABC News now describes the floods as "unprecedented".
Before the ABC: an occasional snapshot of news in the days BABC
Posted by Marc Hendrickx at 8:24 PM

Email ThisBlogThis!Share to TwitterShare to FacebookShare to Pinterest
Labels: BABC