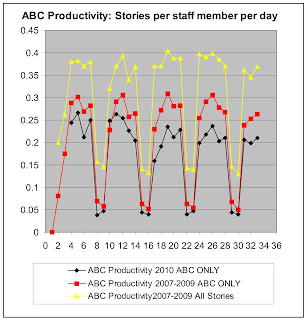 Stories per staff member per day versus day in June
We recently completed a productivity survey of ABC News. This used ABC’s news archive to determine the output of ABC News for the month of June in each year of the archive (2003-2010). Staff figures were obtained from ABC annual reports.
The survey found the following:
Like other news agencies ABC supplements its news with material from third party agencies. The ABC obtains its additional news material from Agence France-Presse (AFP), APTN, Reuters, AAP, CNN and the BBC World Service. As our survey looked at the total number of stories in the ABC archive and did not take the source of the news article into account it appears we have over-estimated ABC’s productivity. To see by how much we looked at every story in the last full week of June 2010 and found the following:
Total Stories  1477
ABC              1073
BBC              5
AFP              94
AAP              134
Reuters         128
Combined      43
On average about 20% of ABC’s weekday material is sourced externally. This jumps to an astonishing 60% on weekends (might as well broadcast Reuters directly rather than keep the weekend staff on). This averages out to about 30% of stories being provided by external agencies.
Based on these figures it appears we have overestimated ABC’s productivity by about 30%. The number of stories directly produced by ABC News for June 2010 would be about  4840. This also means ABC’s productivity further plummets to just 5 stories per staff member per month, or about 1 per week! Poor value for money by any account.
ABC’s new marketing campaign is now inviting its audience to “join the conversation” or enter something new. We think a more truthful slogan may be “ABC News: now doing much much less, with much much more.”
Posted by Marc Hendrickx at 12:05 AM