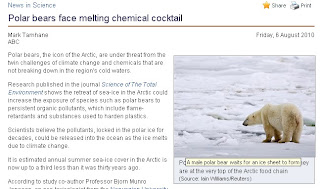 ABC HEADLINE: "Polar bears face melting chemical cocktail" by Mark Tamhane ABC science news posted online 6 August 2010.
ABC REPORTED: ABC reported on a research paper published in the journal Science of The Total Environment that suggests the retreat of sea-ice in the Arctic could increase the exposure of species such as polar bears to persistent organic pollutants, which include flame-retardants and substances used to harden plastics.
ABC accompany the report with a picture of a polar bear. the caption reads "Polar bears are particularly at risk, because they are at the very top of the Arctic food chain." However passing a mouse over the image produces the caption "A male polar bear waits for an ice sheet to form". See screen shot above. Update-the mouse over cation now is the main caption-see screen shot below.
THE COMPLAINT: Are ABC reporters so deluded they now think they can talk to the animals. Is ABC reporter Mark Tamhane a Polar bear Whisperer? We look forward to an interview with the Polar Bear in the near future.
Can ABC explain how it knows that the Polar Bear in the photo is "waiting for an ice sheet to form"? and not say waiting for a meal? Placing this fanciful caption on a science article is demeaning to science. Please remove the mouse over caption.
OUTCOME: Pending
COMMENT: Given the next ice age isn't too far away I guess the polar bear may not have to wait too long. For another example of ABC's efforts reporting on polar bears see our report from February.
Update 16:46: things gets worse as the main caption gets replaced by the mouse over-see screen shot below. 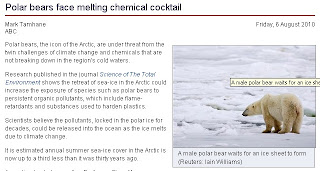