Unfortunately ABC's current batch of bed wetting activists  reporters were born without the sense of perspective gene. This important gene helps normal people discern pure sensationalism from information that we need to pay attention to. Without the gene ABC's affected reporters appear incapable of telling fact from fiction and as a result it is open to spreading sensationalist propaganda.

Case in point is a report yesterday by ABC's Hamish Fitzsimmons. It appears that a dysfunctional perspective gene has affected  Hamish's ability to do basic research.

Here's Hamish's headline:
Sea level rises due to climate change could cost Australia $200b, Climate Council report finds
In his report Hamish provides a platform for professional doom-sayer Will Steffan to make the following statement:

"If you look at a 1.1 metre sea level rise - which is the high-end scenario for 2100 but that's what we're tracking towards - you're looking at more than $200 billion worth of infrastructure that's at risk." "If you look at some of our most vulnerable areas, and the Sydney region is one of those, you would say toward the end of this century that a one-in-100-year flood is going to be happening every few days," he said.

In regard to a sea level rise of 1.1m (1100mm) Will Steffan says "That's what we're tracking towards". Really?

Hamish didn't bother looking at the facts, nor it seems did the alarmist Climate Council. We spent approximately 30 seconds on the internet to locate the following chart from the
Permanent Service for Mean Sea Level (PSMSL):

This shows long term sea level in the Sydney area. The graph shows flattish trends from the start of the record to about 1950, then a step change, followed by flattish trends to the end of the data. A simplistic linear regression analysis would provide an average annual sea level rise of about 0.55 mm per year. Extrapolated to 2100 this would amount to an additional rise of 47 mm. This is a very small fraction of what Steffen believes "we're tracking towards".

We have a bunch of alarmist activist scientists who it seems are incapable of analysing real world data feeding gullible reporters who basically appear unwilling to check the facts. The end result is the spread of misinformation.

Unfortunately at this stage there is no cure to what is being called Sponge Syndrome.

Update: The chart below extends the raw Denison data forwards in time and shows what needs to happen in order to satisfy the Climate Councils notion of what we're tracking towards". This lacks credibility and the ABC should ask the council about it. 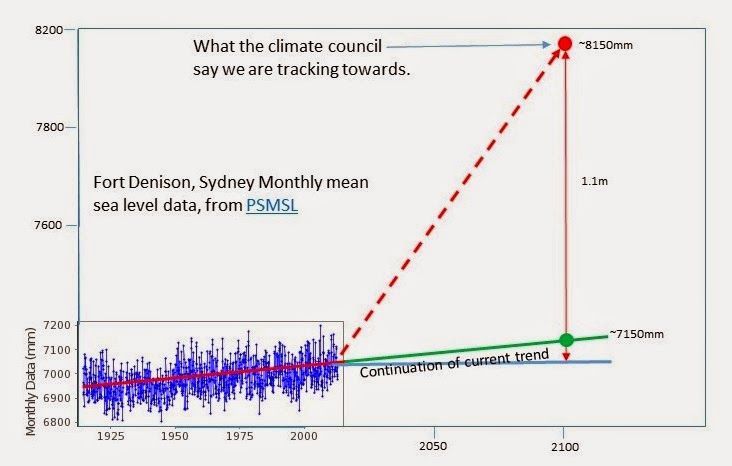 Posted by Marc Hendrickx at 8:47 AM