Back in 2007 ABC's alarmist current affairs program AM, lead by Tony Eastley (who was paid by the Climate Commission to MC one of its meetings) reported that the Arctic could be ice free by 2013 (see here). In its report ABC provided no critical questioning and did not ask for other opinions at the time. It ended with this dire warning from reporter Barbara Miller: "As the world meets in Bali, Al Gore went on to repeat his calls for tough action on climate change. The trouble is, it looks increasingly like it may already be too late." 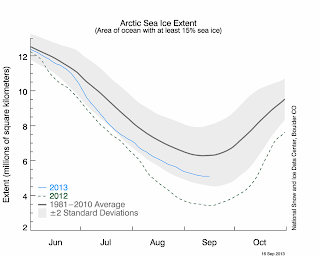 The latest National Snow & Ice Data Center (NSIDC) – click image to view at source  image of arctic ice extent showing that the summer melt for 2013 has turned the corner. The figures indicate the forecast ABC trumpeted was incorrect, only by about 5,000,000 square kilometers.

Perhaps we can have an update from Auntie, or would this be too embarrassing?

Posted by Marc Hendrickx at 9:34 AM