ABC have a piece on its Environment page from The Climate News Network (PS  I think that the CNN moniker is taken) titled: Caucasus farmers a picture of climate change. The CNN are convinced that:
Sounds like your typical activist creedo no wonder ABC found the item of interest.

The story ABC re-printed includes this mention of hailstorms:

There are often hailstorms in Armenia and throughout the rugged and mountainous Caucasus region but the ferocity of this one — happening in mid May when crops were just coming to life — was highly unusual.

We turned to the trove newspaper database and conducted a quick search. To our amazement the following article popped up from the SMH of Monday 10 September 1877. It makes for an interesting read, click to enlarge or follow the link to the source: 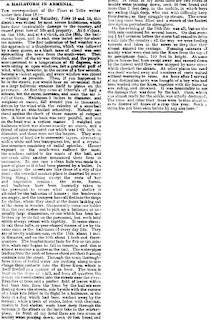 Posted by Marc Hendrickx at 9:48 AM