ABC in the news round up 5

Part 1. The uncritical reporter. ABC's Environmental reporter Sarah Clarke, already the recipient of one GULLBUL, pushes hard for second gong with her uncritical report about the Klimate Kommissar's latest piece of Lysenkoist propaganda. Might as well publish the press release. Not one critical question posed, but then that's Sarah's standard approach. In ABC's report the Kommissar's enlist the help of a former defence chief to add authority(???). Perhaps next time ABC should think to ask a climate expert, hmmm, Richard Lindzen comes to mind.
ABC so blind to the alarm they let Retired admiral Chris Barrie 's crazy comments go unquestioned:
There’s a one in two chance that by 2100 there’ll be no human beings left on this planet. The planet will exist, but it’s just that my granddaughter won’t be part of it. And I think that’s a pretty alarming statistic, probability, one in two chance if we don’t correct out behaviours. Andrew Bolt digs further.

ABC broadcast this howler from via ABC RURAL.
Professor Lesley Hughes, a climate commissioner, says it's not the job of the commission to reconcile science with policy and politics.
"What the report is, it's about science. We're putting out the scientific facts as we best understand them at the moment and those are the facts that we would hope that governments, policy makers and investors use in making their decisions.

The Klimate Kommission is pure politics - no science there, just flaky beliefs, inflated egos and experts in Penis Gourds.


Here's what Dr Prof. Hughes stated in ABC's earlier report:
"In order to achieve that goal of stabilising the climate at 2 degrees or less, we simply have to leave about 80 per cent of the world's fossil fuel reserves in the ground. We cannot afford to burn them and still have a stable and safe climate," she said.

Seems like someone is pushing hard on policy there. In regard to "safe climate", what a ridiculous statement, there is no such thing. Perhaps Prof. Hughes would prefer the safe climate faced by our early settlers when all that coal was still in the ground?

The Klimate Kommissars put a lot of faith in climate models. Here's a quick reminder of how those models are tracking... 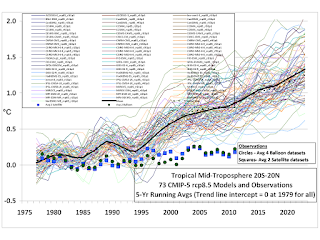 Climate models versus observations, the disparity truly a Feynman moment. But don't expect the Klimate Kommissars or the ABC to mention it.

Also...
Former High court judge Michael Kirby calls for a return to meat being a luxury item. On his pension he'll be one of the few remaining able to suck the fat off a sweet pork chop. Spam for the rest of us.

And...
ABC staffers reveal a reckless indifference to development in northern Australia claiming "There's never been much support for a food bowl in northern Australia; perhaps just a fruit platter. " This sort of thinking is typical of ABC's anti-development, anti-industry, anti-progress mindset that would damn billions to poverty. In the meantime some visionary thinking from some real leaders goes unreported:
Food Bowl within reach: Andrew Robb
NATIONAL leadership is about having the courage to lay out a vision for Australia's future, to inspire optimism and hope with big ideas.
Under Tony Abbott's leadership the Coalition has taken the bold step of putting the development of northern Australia high on the agenda, aiming to:
• Develop a food bowl that could double Australia's agricultural output.
• Expand the tourist economy in the north to two million tourists annually.
• Build an energy export industry worth $150 billion and see major increases to resource exports.
• Establish world-class medical centres of excellence.
• Create an education hub with world-class vocational and higher education campuses.
• Expand Australia's export of technical skills related to resources and agriculture. 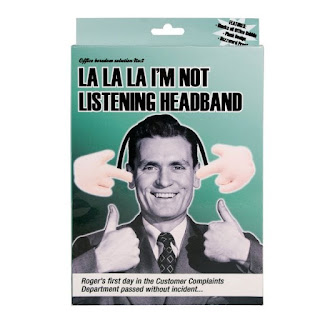 
ABC continue to play politics with the NBN with this report that suggests Telstra's copper network is not up the job in providing high speed broadband. (ed funny that's what we're on and we don't have any probs). ABC has already been caught cheer leading for the government on the NBN (see above), but continues to misrepresent the issues with this piece that includes totally misleading figures about NBN costings. After recent asbestos problems were revealed with the NBN runout is there anyone left who believes the government's figures outside the ABC?

It seems the issue reported on is about maintenance. Copper will perform very well if repairs are performed correctly. How will the optic fibre cables of the NBN cope with similar lax maintenance practices? The optical fibre corporation have the following to say about the effect of moisture on optic fibre cables. If Telstra's repair standards were applied to future Optic fibre repairs how would they perform? Perhaps someone can put the question to Sen. Conroy. What would be the comparative repair costs for copper?

The basic mechanical failure mechanism for optical fibers is the slow to rapid growth of any glass imperfections in the fiber caused by the fiber being under stress. This "fatigue" phenomenon can be accelerated with the presence of moisture (H20) molecules at the glass surface of the fiber. The greater the concentration of the water molecules (OH - ions) at the glass surface, and the greater the stress applied to the glass, the more rapidly the surface imperfections will grow. This accelerated fatigue in the presence of OH- ions is similar to "stress corrosion".
Part 6: Sucker of the week. This week awarded to Ian Allen Executive Producer, Content, ABC Innovation who was gullible enough to believe The Climate Institute would provide unbiased information. Congrats Ian you win this week's Gullibull.

Ian's photo from his Claxton Speakers profile page. Green in heart s well as sleeve, but one wonders how much power that CRT monitor is emitting! Perhaps the ABC will provide him a new PC.

Posted by Marc Hendrickx at 8:42 PM

Email ThisBlogThis!Share to TwitterShare to FacebookShare to Pinterest
Labels: abc round up, churnalism, nbn, sarah clarke