ABC in the News Round Up 2

Part 1 Bias. The Australian checks some facts about the fact checker. Seems someone has a diversity problem.
Skelton tweets his objective opinion of broadcaster Alan Jones and The Sydney Morning Herald's Paul Sheehan, October 31: SHEEHAN in praise of Jones. The biggest blow hard of all and lowest common denominator broadcasting.
Skelton's objectivity on display in another tweet, November 11: MAYHEM as Tony Abbott plan for Alison Anderson backfires.
Skelton tweets, December 11, on a fellow media watcher: GERARD Henderson would do well to follow his advice. Not one to care about the feelings of others he disagrees with.


Click the link above for more unbiased commentary from the ABC head fact checker.

On the topic Media Watch Dog (No.184) takes ABC head Mark Scott to task over his bias denial problem. We had a go of our own earlier in the week. In the meantime Mark Scott's deep bias denial revealed in senate estimates, for transcripts see Quadrant and Andrew Bolt's Blog.
The problem so clear even SMH can see it:"Skelton, the ABC's fact-checker-in-chief, did not check the lie. He just passed it on, and let it stand, unchecked, uncorrected and unpleasant."


Catallaxy Survey finds ABC's fact checker ain't credible. Click the link to add your voice.
Do you think the appointment of Russell Skelton as Head of Fact Checking at the ABC is sound?

Part 2: Environmental beat ups for the week-Spot the reality gap. Couldn't go past this one for unchecked alarm:
Report says hundreds of buildings vulnerable to flooding from rising sea levels at Port Fairy
The consultants found if the sea level rises 80 centimetres by 2080, up to 390 buildings could be vulnerable to flooding.
Realism interlude: Tide Gauge data from nearby Portland from 1992 shows an average annual rise in sea level of about 3.3mm /year. That's quite dramatic! However if it continues at this rate in 2080 we could expect sea level to have risen by a fairly non dramatic 23.5cm, or just 29%  of that dramatic forecast. Are ABC reporters capable of simple mathematics? Here a graph to show the size of the reality gap ABC failed to report. 
Part 4: A fresh perspective?
ABC advertise Clarke and Dawe: A Fresh Perspective.These two have been riding the same Shtick for 25 years. Good grief, it's as fresh as a month old bottle of milk left out in the sun with the lid on. Yogurt anyone-it's as fresh as Clark and Dawe.

Part 5: Your taxes at work
My life so much richer now that ABC has used our collective funds to brings us: Plant thinking
"Michael Marder is working on a philosophy of vegetal life."
No better place to look for vegetables than ABC's Ultimo head quarters.

Part 6: Missing News
These stories failed to penetrate ABC's Groupthink Barrier:
CFCs 'are the real culprit in global warming'
BANNED aerosols that caused the ozone hole - not carbon dioxide - were responsible for global warming since the 1970s, according to published research from one of Canada's leading universities.
No Fukushima radiation problems: report
Radiation leaked after Japan's Fukushima nuclear disaster in 2011 is unlikely to cause any ill health effects in the future, says a UN scientific committee drawing up a major new report.
Part 7: Moth balled
ABC's web pages are a hive of broken links and lost information, like the "water" page, "your No.1 online water resource". According to the hype it's an "ever-growing resource for water-related issues". The site was last updated....Tuesday, October 28, 2008 4:55pm AEST. Slight contradiction in terms, I'm sure ABC's fact police will be on to it. Here's the most recent story:

Part 8: ABC provide the facts they want, not those available.
This short piece with a very long headline (11 Attacked after 20 men break into share house in St Albans in north-west Melbourne) about gang violence in Melbourne's north west was not only very late, the incident occurred on Friday but was not reported by the ABC until Sunday, but its missing some vital information. Just as well The Herald Sun thought to add the police statement:
Senior Constable Adam West said: ''Investigators have been told that the offenders are perceived to be of African appearance and wish to speak to anyone who may have more information about the incident.''

Part 9: Sucker of the week. An occasional award for one of Aunties gullible reporters. This week awarded to: ABC Head Mark Scott who is in denial about bias under his nose. 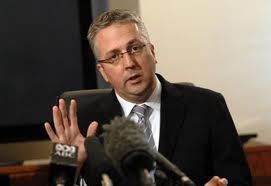 Hands up if you don't have a clue. Mark Scott, winner of this week's "Gullibull".

According to this ABC report Mr Scott: Scott says the fact-checking unit will be transparent and the evidence behind its judgments will be made public.
He told the hearing that the ABC has rigorous accountability standards that all journalists are held to.
LOL!
That's one deluded individual. Challenge for Mr Scott: remove the FOI exemption from ABC programming so the public can see just how transparent the ABC is.

Until next week...
Posted by Marc Hendrickx at 9:27 AM

Email ThisBlogThis!Share to TwitterShare to FacebookShare to Pinterest
Labels: abc round up, missing news