ABC in the News Round up 4

This week ABC provides adoration to Tm Flannery rather than tough questions, Greece throws its ABC under a bus-why can't we follow suit, there's still no one yet to accompany Amanda, and more...

Part 1: Journalism 101 - Asking the difficult questions.
Australia's expert on Tree-Kangaroos, Possums, and Penis Gourds Tim Flannery (who also doubles as a self proclaimed climate guru) has been telling us for a quite some time that we are all going to dry up and fry. ABC even paid for a woeful TV series featuring Tim and fellow alarmist John Doyle taking their Tinnie down the Murray Darling to promote flights of fancy. This week ABC's World today interviewed Tinnie Tim who said: "We'll see an increase in flooding frequency, we'll see the number of people exposed to flooding go up somewhere between four-fold and 17-fold. So there's just a lot more people are going to be exposed to the dangers of flooding." Of course a few years back Tim was heard to expose a different opinion to Maxine McKew:

TIM FLANNERY: Well, you can't predict the future; that's one of the things that you learn fairly early on, but if I could just say, the general patterns that we're seeing in the global circulation models - and these are very sophisticated computer tools, really, for looking at climate shift - are saying the same sort of thing that we're actually seeing on the ground. So when the models start confirming what you're observing on the ground, then there's some fairly strong basis for believing that we're understanding what's causing these weather shifts and these rainfall declines, and they do seem to be of a permanent nature. I don't think it's just a cycle. I'd love to be wrong, but I think the science is pointing in the other direction.

MAXINE McKEW: So does that mean, really, we're faced with - if that's right - back-to-back droughts and continuing thirsty cities?
TIM FLANNERY: That's right. That looks to be the case. We'll know probably within two or three years, I suppose, how this is going to play out, particularly for Sydney, because its water supply is limited to that sort of scale, but it is my fear that the new weather regime is going to be a much drier one, and while we may get the odd good rainfall event, they're going to be much less frequent than in the past, and we'll just be in a different climatic regime.

Tim would love to be wrong and based on these very sophisticated computer tools. Well he is!Tim lives up to his trademark line. Let's review...Hurricanes can be tied to climate change

TONY JONES: Now, with America still reeling from these hurricanes, Rita and Katrina, to what extent do you believe these extreme events could be linked to global warming?
DR TIM FLANNERY: Look, I think that there is a clear link.

Well the IPCC says there ain't: from Chapter 4 of IPCC Special Report on Extremes
When will a journalist (ed-what they have them?) at the ABC think to look over Flannery's record and ask some tough questions?

Part 3: Environmental beat ups for the week. No beat ups just excessive cheer leading. Seems ABC has got the hots for US environmental activist and alarmist preacher Bill McKibben. Here are just a few of the ABC's articles Bill appeared on or garnered a mention, all at your expense and without critical comment (and some of these people consider themselves journalist, others are activists-yes that's you Fran and Sara):

That's just recently. A search of Google for "Bill McKibben" at site  www.abc.net.au yields 85,900 results. By comparison a search for a real expert an the ABC, let's say "Richard Lindzen" yields 35,500 items and most of these ain't long winded cheer leading posts. Seems ABC has some catch up to do. Does the word diversity appear in that charter?

Part 4: What to do with your National broadcaster?
Greece leads the way!  Greek government to close ‘wasteful’ state broadcaster to save money, axing 2,500 jobs. We could axe 5000!

Part 5: Missing News: Some good news for corals published in a recent edition of the Proceedings of the National Academy of Sciences missed by ABC Science. I guess a science journalist would have covered these interesting results. Global warming activists on the other hand...well you know the story.

Part 6: Sucker of the week. See Part 1. For reporting that should make them blush with embarrassment this week's Gullibull goes to The World Todays' ELEANOR HALL and ALISON CALDWELL. Congrats ladies. 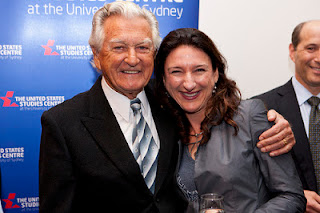 Eleanor with friend.
Apologies - no photo of Alison as all the photos we could find on the net are just too boring.

Posted by Marc Hendrickx at 9:47 AM