Adjust your predictions to match the facts

The CONversation this morning posted an article by ABC's favourite Coral whisperer Ove Hoegh-Guldberg. The post is titled "Drowning out the truth about the Great Barrier Reef". It certainly lives up to the headline, for it seems the truth has been well and truly drowned.

I posted the following comment, that survived until about lunch time before being removed by the editors:


Doesn't help the media, Ove when you make ridiculously overblown statements about coral mortality. Your recent failed predictions made on your blog about coral armageddon on Ningaloo, following higher than normal water temps is a classic case in point. While bleaching occurred, mortality was no where near as severe as you predicted.
I suspect if you tone down the rhetoric and hyperbole and get some predictions correct you may find the media more inclined to listen
As to your claims of being a "humble" scientist-pull the other one mate, I believe it plays Narcissus.
My comments regarding failed predictions of coral mortality at Ningaloo were based on a dramatic prediction made by Ove in a post at his blog Climate Shifts titled Mass mortality of corals on West Australian reefs. The prediction was apparently made on May 6, 2011 (see screen shots below). There is an update on reef conditions at Ningaloo and based on this it seems that the predictions of coral mortality made by Ove are in error by a factor of 3!
The updated information (not dated) reads:
UPDATE-2:  Looks like the Ningaloo reefs are likely to escape major mortality given they have remained just outside the main hot spot.  These reefs are likely to lose about 10% of their corals. Things still remain serious in this analysis for the Houtman Abrolhos Islands (well inside the hotspot – see map and Tyler’s comments).  We will have to wait for the results of the surveys to be completed and analysed.
Looking at the prediction as it reads today, and the update above,  it seems that while the coral mortality predictions were way off the mark, (Ove predicted coral mortality of 30%, the update suggest actual figures of 10%), Ove may have been correct about one part of his "prediction":  the effect of bleaching on the Houtman Abrolhos Islands. However when I downloaded the webpage containing this prediction in May this is how Ove's "Prediction" read:
PREDICTION: We will see large-scale mortality of reef-building corals (30% or more) and many other organisms on reefs from Exmouth to Shark Bay along the West Australian coastline (300 km or more).   This will occur over the next 1-3 months.  Reefs in this region will take more than 10 years to recover (see screen shot below).

Nothing about the Houtman Abrolhos Islands in this early version. Here's how the "Prediction" currently reads:
PREDICTION: We will see large-scale mortality of reef-building corals (30% or more) and many other organisms on reefs along parts of the West Australian coastline.  This will occur over the next 1-3 months.  Reefs in this region will take more than 10 years to recover. Coral reefs around the Houtman Abrolhos Islands look particularly vulnerable.

If only we could all change our predictions to match the facts! Ove is welcome to post an explanation.

To add to the insult at The CON, after my factually correct comment was removed by the editors, they let through this comment, without providing further explanation:
"It would seem our geologist friend who posted earlier this morning has deleted his comments."
As indicated above my comment was removed by the editors. Seems the truth has been drowned, then cremated!
In his book Future Babble journalist Dan Gardner takes a critical look at expert predictions and the psychology that explains why people believe them even though they consistently fail. Based on the failed predictions at Ningaloo, and the apparent attempt to later change the prediction to match the outcome, it seems ABC's coral whisperer is in fact a coral babbler.
Here's what Ningaloo Atlas says about the bleaching event...(seems 10% will probably be incorrect as well)
http://ningalooatlas.org/2011/05/23/ningaloo-coral-bleaching-update/
Screen shots from Climate shifts,click to enlarge:
1. Downloaded May 18,2011 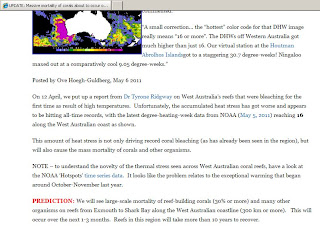 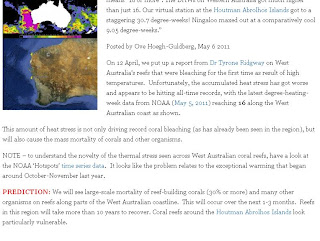 Posted by Marc Hendrickx at 7:17 PM

Email ThisBlogThis!Share to TwitterShare to FacebookShare to Pinterest
Labels: ove hoegh-guldberg, the conversation