working on a solution 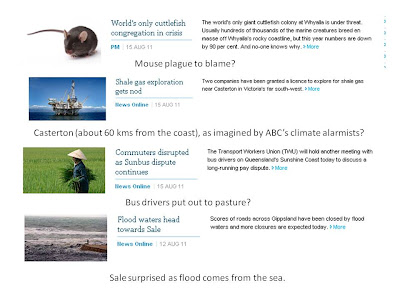 We initially advised ABC of the issue on the 4th of April. According to those in the know..."ABC Innovation has advised that stories from across the ABC that are filed with no image are randomly assigned an image on the Environment portal from a pool of images. I understand relevant ABC Innovation staff are aware of the discordant match-ups that this system has produced and have been working on a solution. The examples published on your website have been brought to the attention of ABC Innovation management."
Posted by Marc Hendrickx at 7:59 PM