Solar minimum and its affect on climate, the other side 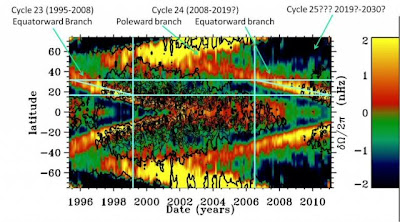 Latitude-time plots of jet streams under the Sun's surface show the surprising shutdown of the solar cycle mechanism. New jet streams typically form at about 50 degrees latitude (as in 1999 on this plot) and are associated with the following solar cycle 11 years later. New jet streams associated with a future 2018-2020 solar maximum were expected to form by 2008 but are not present even now, indicating a delayed or missing Cycle 25. Image and text from: http://www.boulder.swri.edu/~deforest/SPD-sunspot-release/
ABC belatedly reported (borrowing from AFP) on a study that suggests the sun is entering a quiet period similar to the Maunder Minimum, which was a 70-year period when hardly any sunspots were observed between 1645 and 1715, a period known as the 'Little Ice Age'. ABC's report provided reference to a recent study by Georg Feulner and Stefan Rahmstorf based on the results of climate modelling that indicated the potential affect on global temperatures may not be significant with just   "a 0.3°C dip by 2100 compared to normal solar fluctuations."
In the interests of balance (lacking in the ABC's report) we decided to ask a real solar scientist. It seems the impact of reduced solar activity may be more significant than the ABC's one sided report suggesting more research is required.

Email sent 15/6/2011
Dear Dr Svensmark,
ABC  News cite a paper by Georg Feulner and Stefan Rahmstorf to suggest that a solar mimnimum would reduce global temperatures by 0.3 degrees by 2100. see GEOPHYSICAL RESEARCH LETTERS, VOL. 37, L05707, 5 PP., 2010 doi:10.1029/2010GL042710 On the effect of a new grand minimum of solar activity on the future climate on Earth
"Here we use a coupled climate model to explore the effect of a 21st-century grand minimum on future global temperatures, finding a moderate temperature offset of no more than −0.3°C in the year 2100 relative to a scenario with solar activity similar to recent decades. This temperature decrease is much smaller than the warming expected from anthropogenic greenhouse gas emissions by the end of the century. "
I am interested in your opinion on the evidence for a future solar minimum based on recent results in the news and its affect on global temperature for a news story.
Regards
Marc Hendrickx
ABC NEWS WATCH
Received  15/6/2011
Dear Marc Hendrickx,
I have had a fast look at the paper, and as far as I can see the authors are only looking at solar irradiance changes, and effects like the one that I have been involved in, like an amplification of the solar signal caused by clouds and cosmic ray modulation, is not taken into account. We known with good confidence that the terrestrial response to the solar signal is 3-7 times larger than from solar irradiance alone (see for example the work of Nir Shaviv, attached-Using the oceans as a calorimeter to quantify the solar radiative forcing-doi:10.1029/2007JA012989). Now if such effects are taken into account the result would be very different (larger solar influence). So I do not think that the present work is the particular helpful in understanding the solar impact in near future. It is only an estimate of the impact of solar irradiance as determined from numerical modeling. In the coming years the sun will show by itself how important it is.
Best wishes,
Henrik  (Svensmark)
We have requested ABC amend their story.
Posted by Marc Hendrickx at 10:12 AM