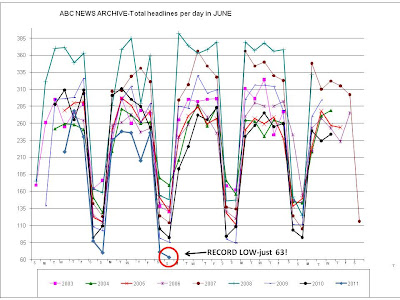 ABC News make the record books posting just 63 stories to its news archive for Sunday June 12, 2011. The lowest number of stories posted on a Sunday in June in its News archive ever. We have had to amend our y-axis twice in the past week to account for ABC's disastrous productivity decline.
For comparison, the record high for the second Sunday in June, was in 2004 when ABC News posted 169 stories. ABC found over a 100 more stories in 2004 with 225 less staff.
Staff in 2004: 735.04
Staff in 2011: 960.84
ABC News: doing much much less, with much much more of your money.
Posted by Marc Hendrickx at 12:05 AM