ABC NEWS: much less for much more

Margaret Simons has used an FOI request to obtain information about the true cost of ABC's 24 hour continuous news service. It appears Margaret has had some success.  However, ABC have used FOI exceptions to refuse significant parts of the request.
According to the figures provided, the total cost of the Continuous News Centre, from its launch in 2006 until the end of last month,  is $25.37 million dollars. 2011 figures are only until the end of March 2011.
Combined with the results of our productivity survey, the figures paint an alarming picture of ABC's failure to efficiently use public funds to provide a news service to its audience.
In the chart below the expenditure is just for ABC's continuous news centre from information obtained by Margaret Simons, and does not include the total cost of ABC's News service. Staff numbers are total News Staff from ABC annual reports, and the number of stories is for the months of June, from ABC's online news archive.
The bottom line is that ABC continues to do much less with much much much more. At a time when the government is weighing up reduced funding for medical research in this years budget, the ABC continues to leech off the tax payer. If the government needs to trim the fat, I know one big fat Auntie who is in dire need of lipsuction. Based on the chart below a return to her fitter 2003 weight  might actually improve her output.  In regard to the 24 hour continuous news service; $25.37 million buys a lot of cancer research. 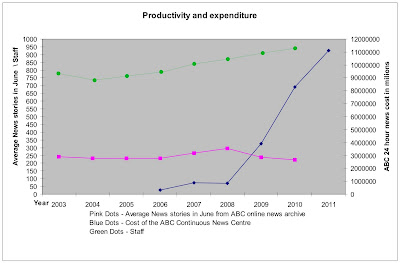 Posted by Marc Hendrickx at 8:06 AM