ABC-Uranium mine in the snowy West Australian Alps! 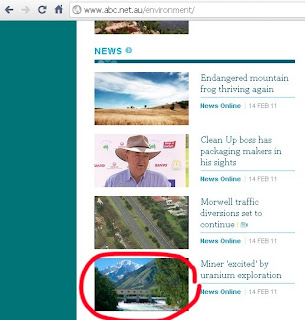 Screen capture from ABC environment portal 14/2/2011
Based on the image (see screenshot above) ABC Environment use to accompany an ABC news story about Uranium exploration near Wiluna, in West Australia it appears the West Australian's have been hiding an alpine wonderland from the rest of Australia. Perhaps this is the way ABC environment staff view every potential mine site?

Here's a Google earth image of the Wiluna Region. Can anyone pin point those snowy mountains here? Anyone? There's a copy of the Prince of Precaution for the winning entry. 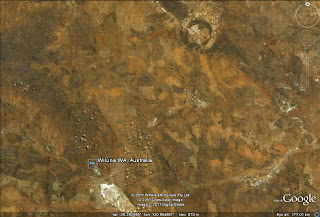 ...and yes that is a meteorite crater in the upper central part of the image. It's Lake Nabberu, the site of the Shoemaker Meteorite impact crater.
UPDATE 15/2/2011: The image to accompany this news article on developing the Potosi Mine near Broken Hill suggest the effects of climate change already quite pronounced in outback NSW. Come to Broken Hill and see the coral wonderland.

Posted by Marc Hendrickx at 7:29 PM