More scientific evidence that indicates the climate models are wrong that won't make it to the news on the ABC. 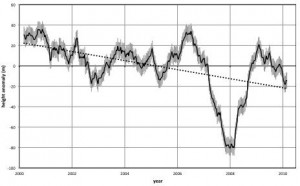 Abstract:
Self-consistent stereo measurements by the Multiangle Imaging SpectroRadiometer (MISR) on the Terra satellite yield a decrease in global effective cloud height over the decade from March 2000 to February 2010. The linear trend is −44 ± 22 m/decade and the interannual annual difference is −31 ± 11 m between the first and last years of the decade. The annual mean height is measured with a sampling error of 8 m, which is less than the observed interannual fluctuation in global cloud height for most years. A maximum departure from the 10-year mean, of −80 ± 8 m, is observed towards the end of 2007. These height anomalies correlate well with the changes in the Southern Oscillation Index, with the effective height increasing over Indonesia and decreasing over the Central Pacific during the La Niña phase of the oscillation. After examining the net influence of Central Pacific/Indonesia heights on the global mean anomaly, we conclude that the integrated effects from outside these regions dominate the global mean height anomalies, confirming the existence of significant teleconnections.


The University of Auckland has had its head in the clouds, and its conclusion is they are getting lower.
The university looked at ten years of data from NASA's terra telescope to discover the average cloud height decreased by 1% over the past decade.


The telescope showed fewer clouds were occurring at higher altitudes.


Researchers believe a significant reduction in cloud height would lead to reducing the surface temperature of the planet and slowing global warming.

.University of Auckland has had its head in the clouds
Posted by Marc Hendrickx at 4:49 PM