Another cyclone forecast BOMs out

A characteristic of ABC News is it's lack of inquiry in testing the outcomes of predictions on climatic events made by experts. One would think that the outcome of predictions would be newsworthy given the amount of money the government allocates to our premier weather agency.

The Bureau of Meteorology annually release an outlook of the coming tropical cyclone season in Spring. We have previously  looked at the accuracy of BOM's cyclone forecasts and ABC's reluctance to cover the disparity between forecast and outcomes, but have not had a chance to follow up on recent pronouncements.

Looking at the 2016-2017 season last year ABC reported that "Weather forecasters are expecting an average to above-average number of tropical cyclones to form this season in the region that includes the Northern Territory."

BOM claimed with a "high" level of accuracy :

So what was the outcome? It seems BOM no longer produce the Darwin Tropical Diagnostic Statement that provided a near real time summary of cyclone activity. Perhaps its buried somewhere else in it's labyrinthine web page. However Wikipedia produce a season summary: 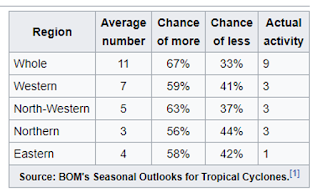 Once again the numbers paint a poor picture of BOM's cyclone forecast skill, but ABC don't think this is newsworthy.
Posted by Marc Hendrickx at 7:50 AM