Heatwaves of times past

According to the ABC it seems that other government acronym, the BOM, has finally got about defining what a "heatwave" is:
For the first time, the Bureau of Meteorology has provided a national definition of a heatwave.

A heatwave is now defined by three or more days of unusually high maximum and minimum temperatures in any area.

Seems we had a different definition in the not so distant past... 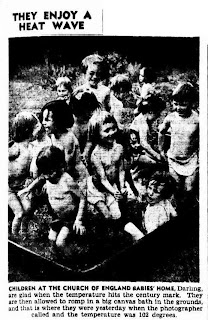 The Great Heatwave of 1908, the year BOM was formed, provides a different definition and a reminder that what goes around may come around again....Thankfully in these enlightened times, along with an approved heatwave definition, we also have access to air con.

THE GREAT HEAT WAVE. The Coburg Leader 25 January 1908.  The heat wave which swept over the greater portion of Victoria for the past fortnight, and which has caused so many deaths and so much distress,was severely felt in Brunswick, and caused a number of deaths, especially among infants and the old and feeble. Day after day the sun rose like a ball of fire over Brunswick, while the heat of the solar rays was supplemented by scorching hot winds and dust,which caused the thermometer to rise rapidly until over 112 degrees was registered in the shade. Doubtless the hot winds were the result of the up-country bush fires, the hot air making its way southwards towards the sea. Then at night there was little relief. The red haze even obscured the moon, and the conditions were so oppressive that many women and children had to sleep in their gardens and under their verandahs,while others, bolder still, slept in the parks underneath the trees-in fact anywhere where a cool spot could be found from the oppressive conditions which everywhere prevailed.

BOM still records January 1908 as having the highest January monthly mean on record for Melbourne at 31.0. There were 6 days in a row over 39.9 degrees including a run of 5 over 40! 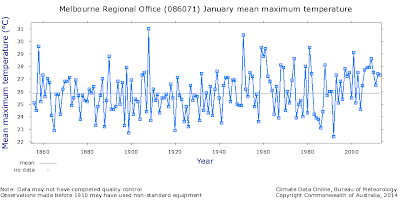