Welcome to 2014. ABC's indifference to the facts continues into the New Year....

First time for Koalas in the upper Blue Mountains! Smacks of being a statement worthy of follow up. Did the ABC bother? Nope. Lets spend 5 minutes on the internet...

From NSW Roads and Maritime Services - Mount Victoria village safety upgrade Review of environmental factors November 2013. Page 66-69:
Koala
No evidence of Koala was found during surveys for this proposal, nor in previous  surveys (MV2L Alliance, 2011). During field investigations and the habitat assessment, ‘habitat critical to the survival of the Koala’ (DSEWPaC, 2012) was considered, but no evidence was found to support Koala activity in the study area.
Although there were three scattered records in the locality during the last 20 years (see figure below) and there are known populations in Wollemi National Park, there are no known populations in the study area. The study area provides marginal foraging opportunities with uncommon secondary food trees such as the Brittle Gum (Eucalyptus mannifera) and supplementary food tree Blaxland’s Stringybark (Eucalyptus blaxlandii). The proportion of food trees is considered to only provide tertiary habitat (DECC, 2008). 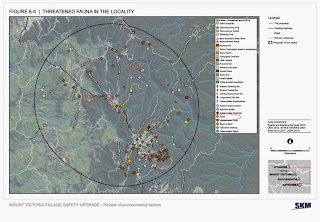 Once again ABC swallow media releases without due diligence! Mind you SMH are not much better with this recent headline that also ignores the reported sightings above:
Rare sighting: Koala seen in upper Blue Mountains"For the first time in 70 years a koala has been sighted in the upper Blue Mountains, near Wentworth Falls."
Posted by Marc Hendrickx at 8:58 AM