It is sad when once trusted public institutions fail to correct their mistakes and promulgate misinformation. In its recent climate statement "Special Climate Statement 48 – one of southeast Australia’s most significant heatwaves" BOM make the following claim: (p.5):"Canberra also set a record with four consecutive days of 39°C."

How reliable is the BOM when it's an-aware of it's own data?

Its climate statement includes a figure purportedly showing the number of days per year on which at least one location in Victoria has reached 45°C. (2014 data as of 19 January): Figure 1. It starts in 1957. 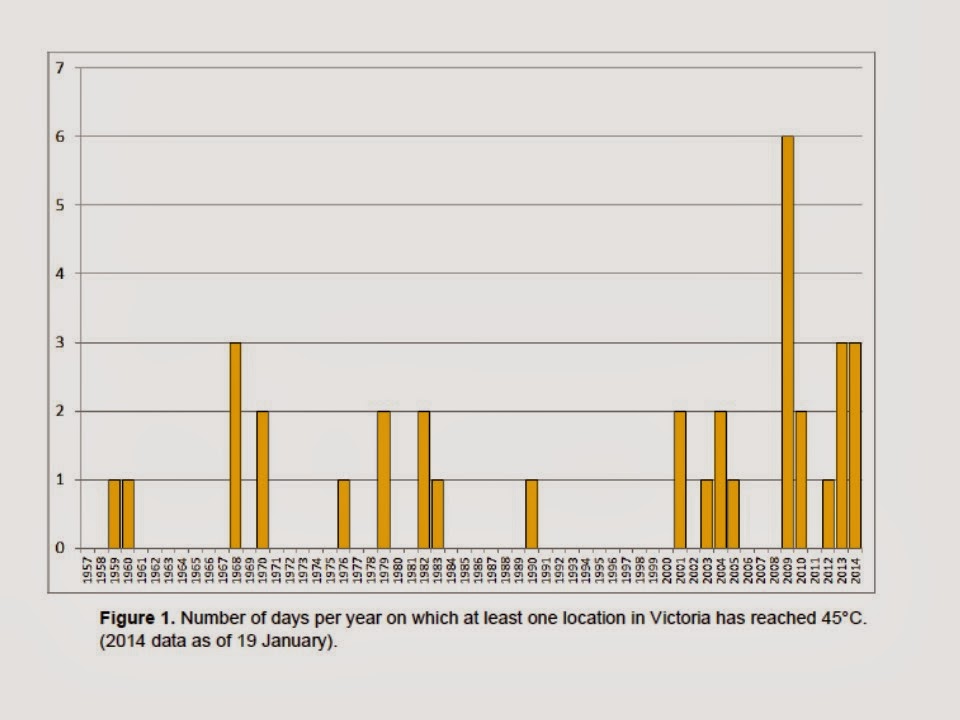 There is a convenient footnote here that reads: 1957 is taken as the starting point as daily data prior to 1957 have not yet been digitised at a number of key locations (e.g. Ouyen, Horsham, Echuca), and hence this indicator would miss a number of days with temperatures above 45°C prior to 1957.
So the graph is not an accurate record! We requested BOM supply information about how many stations were used in constructing the graph.

Based on data provided for the BOM's ACORN network for Victoria the following graph showing the number of days per year on which at least one location in Victoria has reached 45, can be produced for stations with over 100 years of digitised data: The same ACORN data used below to provide an indication of days per decade over 45, you can make your own conclusions. 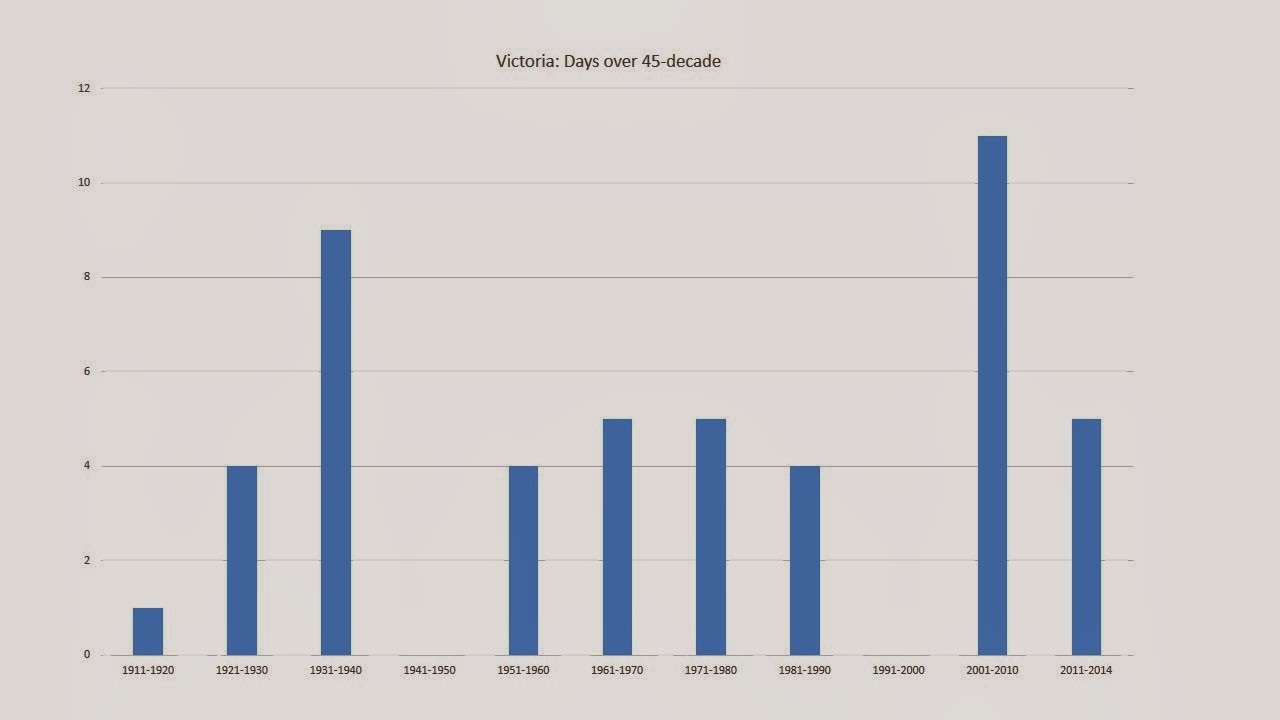 UPDATE-response to our inquiries from Simon Birmingham Parliamentary Secretary to the Minister for the Environment:


Thank you for your correspondence of 19 January 2014, to the Minister for the Environment, the Hon Greg Hunt MP, concerning data from the closed Bureau of Meteorology station at Acton in Canberra. The Minister has forwarded your letter to me as the matters you raise fall within my portfolio responsibilities.

I can assure you that the Bureau takes matters raised by members of the public very seriously. I am advised that the Bureau is working to digitise as much of the early data records from various sites across the country as possible. Digitisation is a resource intensive task. Over the past decade, the Bureau has significantly increased its digitised holdings of historical climate data.

The Bureau has contacted the National Archives of Australia for the physical location of the specific data you have requested, and will contact you as soon as this information comes to hand. Acton is one of about 40 sites across Australia whose digitisation has been identified as a priority by the Bureau and this work will be carried out as staffing and other resources allow.

I am advised that Canberra has had no known periods when temperatures reached or exceeded 40°C on four consecutive days. This statement is not contradicted by the Acton data from January 1939, as those data do not contain any sequence of four consecutive days of 40°C or above. The maximum temperature at Canberra Airport on 17 January 2014 was 39.7°C, and hence there was also no such sequence during the 2014 heatwave.

In the broader context of your email, the Bureau agrees that extreme and prolonged heat was widely experienced in south-eastern Australia in 1939. The Bureau has characterised the recent January 2014 heatwave as one of the most significant in the nation’s history, sitting alongside the historically significant event of 1939, as well as the heatwave of 2009. Placing events in historical context is of great interest to the Australian community and for improving understanding of climate science.

Thank you for taking the time to write on this matter.