Update Nothing abnormal about NT fires

ABC provide the reply below to our complaint regarding their claims CO2 releases from NT fires are abnormal. Tainted as it is by a groupthink mentality, lack of balance and failure to live up to normal journalistic standards on environmental reporting, ABC's exceptionally low standards are fast becoming the norm. (To see how totally normal this year's fire season is, skip to the links below ABC's response-title in red).

Here's their response (in italics) received October 11, our comments in bold:
Thank you for your email of October 7 concerning the story "Science counts carbon cost of Red Centre fires".
As your correspondence raised concerns of a lack of accuracy, your email was referred to Audience and Consumer Affairs for consideration and response. The unit is separate and independent from ABC program areas (as separate as Chang and Eng) and is responsible for investigating complaints alleging a broadcast or publication was in contravention of the ABC's editorial standards (by providing a big rubber stamp for ABC's errors and misleading reports). In light of your concerns, we have reviewed the story and assessed it against the ABC’s editorial requirements for accuracy, as outlined in section 2 of the ABC’s Editorial Policies:http://www.abc.net.au/corp/pubs/edpols.htm. In the interests of procedural fairness, we have also sought and considered material from ABC News.

Your complaint is that the use of the “abnormal” in relation to the fires is a “gross distortion” of the facts. The story carefully and accurately described the fact that these fires are part of the natural cycle in the Northern Territory but are, none the less, far from common.  (In the story Dr Ashley Sparrow indicates it is "an example of the boom-and-bust ecosystem in the Red Centre at work". Only activist reporters at the ABC could construe this as abnormal. It is clearly part of a well known common natural cycle.)
That you had to go back 60 years to find reports of equivalent fires, demonstrates this.
(This is a demonstration of the ignorance and laziness of ABCs respondent. I found the news articles on the National Library Newspaper site in about 2 minutes. The Archive ends in the 1950s. A fuller account of bushfires activity in the NT is provided below, this located in about 2 mintues. It seems that large fires in the NT are quite common.)
Describing such events as “abnormal” is only intended to indicate their infrequency, which is quite clear when read in context. The story is not misleading.

(Based on the evidence of fire activity in the NT use of the term "abnormal" is indeed misleading, sensationalist and inaccurate).
Accordingly, while noting your concerns, Audience and Consumer Affairs are satisfied the story was in keeping with the ABC’s editorial standards for accuracy (In other words it as woeful and as tainted by Groupthink as the rest of ABC's environmental reporting). Nonetheless, please be assured that your comments have been noted and conveyed to ABC News management (As the same mistakes keep on occurring in ABC's echo chamber one doubts that much notice is paid to any criticism).
Thank you for taking the time to write; your feedback is appreciated (I'm sure it is).
End Response

Some further information on NT Bush fires
from Understanding bushfire: trends in deliberate vegetation fires in Australia-Northern Territory
Few people are aware of the role, the process or the scale of burning (controlled and uncontrolled) that occurs in the tropical savannas of northern Australia. Bushfires are a ubiquitous feature of the Northern Territory dry season, with the territory having the most frequent, largest and more poorly documented vegetation fires of any part of the continent. When considering Northern Territory bushfires it is necessary to discard all preconceptions of size, frequency and even harm, based on southern vegetation fire regimes, as they are simply not translatable to the savannas that dominate Australia’s north.
Area burned: The frequency and area burned in any one year varies considerably. Nevertheless, by
southern standards the total and the proportion of land burned in any given year is extraordinarily large. In the higher rainfall savanna woodlands of the northern Kimberley, the Top End and Cape York up to half of the total area may be burned either every year or every second year (Anderson 1996, Dyer et al. 2001, Press 1998, Russell-Smith et al. 1997). Many of these fires are intense and therefore pose the most danger in terms of their capacity to devastate populations of fire-sensitive native plants and animals, to be costly and disruptive to pastoral operations, and to pose a threat to communities and property. The frequency of fires tends to decrease further south for a number of reasons. They include reduced rainfall and therefore vegetation density, reduced grass reserves due to intensive use of these savannas for grazing, and greater efforts to suppress fires to prevent destruction of valuable fodder resources.

Intense fires commonly started by lightning strikes during particularly dry seasons have occurred
throughout the Northern Territory’s modern history. The amounts of land burned in these events are extraordinary. The Council of Australian Governments report (Ellis, Kanowski & Whelan 2004) lists four major bushfire seasons in the territory since the late 1960s that collectively burned 168,000,000 ha. In 2002, approximately 38,000,000 ha burned in planned and unplanned fires. This represents 29 percent of the Northern Territory. In comparison, the January 2003 fires burned ‘only’ 226,000 ha in the Australian Capital Territory and 1,000,000 ha in Victoria. See Table 1 above.

So nothing "abnormal" about large bush fires in the NT!


See also this animation of fires around Central Australia for the period May 1999 to April 2004:
http://www.nt.gov.au/nreta/natres/bushfires/research/desertfire.html


NASA image from 2007...Below Huge fires scorched grassland and savanna in the Barkly Tableland region of Australia’s Northern Territory in October 2007. 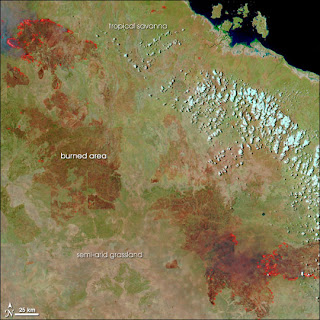 Based on ABC's story one wonders where Fred Williams got the inspiration for this series of paintings?... 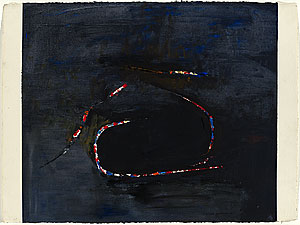 Bushfire in Northern Territory 12) (1976)
How much of Kakadu Burnt each year? Did I hear an average of 46%? And that's abnormal? 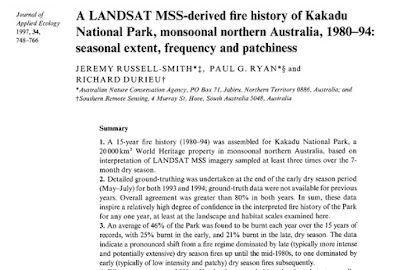 Abnormal? According to the paper...Fire frequency and biodiversity conservation in Australian tropical savannas: implications from the Kapalga fire experiment
Every year large proportions of northern Australia's tropical savanna landscapes are burnt, resulting in high fire frequencies and short intervals between fires.


Vast Tracts! And to the ABC this year's fires are somehow "abnormal"!

Posted by Marc Hendrickx at 8:55 PM