One of my favourite quotes is by the late great Physicist Richard Feynman who described Cargo Cult Science thus:
"But there is one feature I notice that is generally missing in cargo cult science. That is the idea that we all hope you have learned in studying science in school--we never explicitly say what this is, but just hope that you catch on by all the examples of scientific investigation. It is interesting, therefore, to bring it out now and speak of it explicitly. It's a kind of scientific integrity, a principle of scientific thought that corresponds to a kind of utter honesty--a kind of leaning over backwards. For example, if you're doing an experiment, you should report everything that you think might make it invalid--not only what you think is right about it: other causes that could possibly explain your results; and things you thought of that you've eliminated by some other experiment, and how they worked--to make sure the other fellow can tell they have been eliminated.
In summary, the idea is to try to give all of the information to help others to judge the value of your contribution; not just the information that leads to judgment in one particular direction or another."
Consider now the following slide from a presentation by the government's Climate commissar, Prof. Will Steffen, titled Climate Change 2009: Faster Change and More Serious Risks. Notice anything missing? 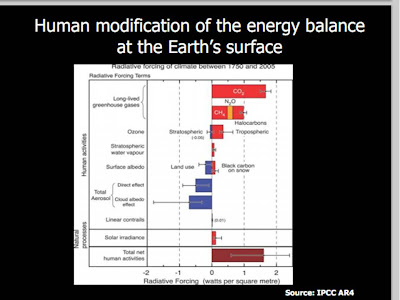 This is IPCC AR4 WG1 FAQ 2.1, Figure 2 -see page 136 of AR4 WG1 Chapter 2. A more complete version of this figure is published in the summary for policy makers (reproduced below from Summary for Policy Makers Figure SPM2 - see page 4). This includes important information about the error range of various forcing components along with an assessment of the level of scientific understanding (LOSU) for various forcings. Note the LOSU of a number of forcings, important in determining the amount of any future warming (or cooling) are described as Low, or Medium to Low. 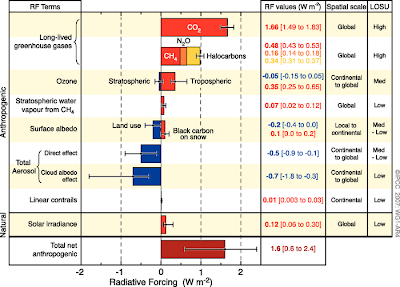 The errors for direct aerosols are a whopping 80%, with errors in cloud cover effects even greater.
In a presentation to policy makers and the Australian public why would Commissar Steffen prefer the incomplete version? Why does he prefer to hide the errors and uncertainties?
Australia's Climate Commission provides a great example of cargo cult science in action. The ABC does the same for journalism.
Posted by Marc Hendrickx at 3:31 PM

Email ThisBlogThis!Share to TwitterShare to FacebookShare to Pinterest
Labels: climate commission, will steffen