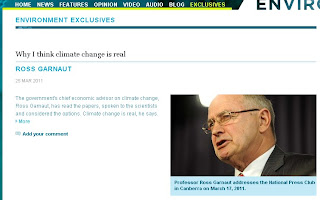 ABC HEADLINE: Why I think Climate Change is real. Posted to the ABC Environment Blog under that heading "Exclusives" on 25 March 2011
ABC REPORTED: The article is a copy, under a different title, of an article published at The Conversation on the 24 March 2011.A note at the end of the ABC version notes it was reposted from The Conversation.
THE COMPLAINT: How does this article count as an "Exclusive"? How does this and other opinion pieces listed as "Exclusive" by ABC Environment count as "exclusive" when this term is generally used in journalism to refer to NEWS reporting and not opinion pieces? How many other articles has ABC Environment falsely claimed to be "Exclusive". Will ABC THE DRUM follow suite and also list its opinion pieces as "exclusives". Has ABC environment broke any actual NEWS stories in the past 12 months that might be considered as "exclusive"?
OUTCOME: Pending
COMMENT: A definition of exclusive: "a piece of news, or the reporting of a piece of news, obtained by a newspaper or other news organization, along with the privilege of using it first."
Posted by Marc Hendrickx at 9:41 PM