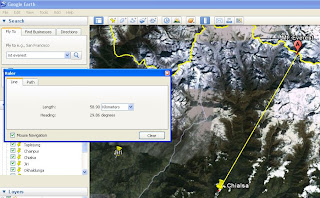 We note that IPCC have yet to correct errors with its AR4, WGII report table 10.2. Here's the list of errors sent to the IPCC secretariat in August. We did not receive a reply to our email.


The following errors are noted for AR4 WGII Table 10.2.
1. Table 10.2 indicates that warming in the Himalaya is 0.09º C.yr-1 and the trend for Si Lanka is 2°C increase per year in central highlands.
2. IPCC provide the incorrect reference to back their temperature figure for the Himalayas. They cite two conference papers and one peer reviewed paper that related to precipitation, not temperature. The correct reference is found to be: Shrestha, Arun B.; Wake, Cameron P.; Mayewski, Paul A.; Dibb, Jack E., 1999. Maximum Temperature Trends in the Himalaya and Its Vicinity: An Analysis Based on Temperature Records from Nepal for the Period 1971–94. Journal of Climate, 9/1/99, Vol. 12 Issue 9 pp:2775-2786.
3. The references for the Sri Lankan Temperatures are not from peer reviewed journals, they relate to precipitation, not temperature-see FOD Expert Review Comments .
4. The figure quoted for the Himalaya is the winter trend, not the annual trend. The annual trend is 0.057 º C.yr-1.
5. The highest annual trend for Nepal cited in Shrestha et al., 1999 is 0.09º C.yr-1 for the Trans-Himalaya.
6. The basis of the Himalayan trends (Shrestha et al 1999) is just 6 weather stations,. The average trend of 5 of these stations dating back to the 1960s is (Max/Min) 0.013º C.yr-1, much less than the 0.057º C.yr-1. All five of these stations are located in the eastern Himalaya. There are problems with use of Kriging method to obtain regional trends.
7. The trend cited for Sri Lankan is incorrect and was brought up in the review of IPCC AR4 WGII:
Watts Up With That reader Justcherrypicked notes:
Timeline:First Order Draft, 10.2.2 Observed climate trends and variability, Table 10.2 does not have a “change in temperature” entry for Sri Lanka, but does have entries for “Change in Precipitation”, and “References”. Which contain, “Increase trend in February and decrease trend in June” and “Chandrapala and Fernando, 1995; Chandrapala, 1996″ respectfully. Clearly, the two references relate to changes in precipitation, not temperature.
The missing entry is noted by Dr. Basnayake in FOD Expert Review Comments. He states:

. Note he said 2.0 C per century.
Dr. Basnayake’s comments are accepted by the lead authors and is then included in the Second Order Draft (SOD) as

Note they changed century to year, and left out the reference as well.
The error is picked up by Xiuqi Fang during the SOD expert review comments ,

, to which the LA responds “Table entries corrected”. Clearly they are not.
Sadly, Dr. Basnayake does not seem to be involved with the SOD as no reviewer comments for him exist.
Clearly, the IPCC statement “2.0 C increase per year” is an error that was pointed out and ultimately ignored. Additionally, the claim is without a citation.
Please correct the mistakes. It is leading to misleading statements in the media such as this ABC report: http://www.abc.net.au/news/stories/2010/06/02/2915724.htm
Regards
Marc Hendrickx
This issue is raised in a Watts Up With That post titled:

Note the errors were found thanks to our follow up of an ABC report that failed to meet journalisitic standards.see Update 2: Mt Everest melting! But who says it's so?
Posted by Marc Hendrickx at 3:53 PM

Email ThisBlogThis!Share to TwitterShare to FacebookShare to Pinterest
Labels: himalaya