No time for a break?

COMMENT: ABC's Media Watcher Jonathan Holmes takes The Australian to task with claims that ABC journos are unable to file original stories because they are run off their feet. Our own productivity survey suggests there is ample capacity in the system. For June 2009 ABC's News 913.14 staff members managed to post 7134 stories as documented in ABC News Archive.This sounds like a lot but its only about 7.8 stories per staff member. Thats 7.8 stories per staff member for the month!  And many of those stories are repeated not twice, but three times over (see screen shot from the archive for June 29, 2005). 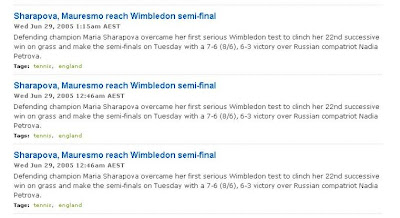