ABC finally discovers the Urban Heat Island Effect with this story that reports on a paper that uses climate models to forecast alarming future urban temperatures.

The UHI effect has a significant impact on temperature and is derived from man-made changes in the energy balance in urban centres, to the point where sites that are affected are not useful for monitoring climate unless they are adjusted. The bias arises as a direct result of two different but associated processes. The first involves direct heating of the air surrounding an instrument from vehicle emissions, air-conditioning, industry etc. The second involves land surface changes that include changes over time due to human influence in albedo (change in vegetation for instance), thermal aerodynamic properties (buildings that change air flow around a site), hydrology (affects evaporation) and morphology of the surface.
You'd think that Australia's Bureau of Meteorology would take steps to ensure station weather stations potentially affected by UHI were removed from its climate reference network. It seems that based on a letter featured on Watts up with that, that BOM has ignored investigating potential UHI for at least one of these "High Quality" stations. How many others are out there? Will the ABC investigate?
Note that as of 12:20pm 24 June 2010 AEST the post at WUWT shows a photo of Laverton Western Australia. The weather station in question is Laverton Victoria, not Western Australia. The station is indicated by the place mark in the image below (upper middle). While the local siting may be reasonable, the affect of encroaching development remains un-accounted for.
(Update: WUWT provide a corection and more analysis of Laverton data HERE) 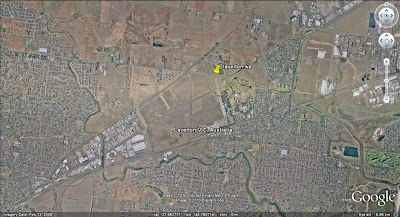 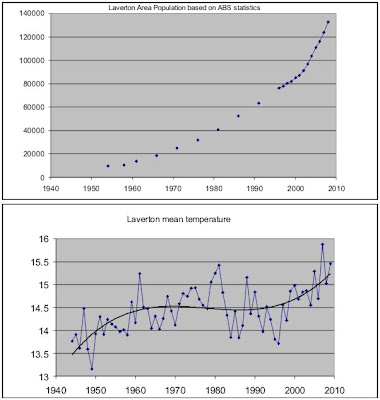 Out of interest the Mean Max temp for Laverton Western Australia appears to have dropped since the late 1970s. You can compare temperature data at BOM's climate data site:
http://www.bom.gov.au/climate/data/index.shtml