It seems ABC's total coverage of important news of the withdrawal of a scientific paper following the discovery of errors in its methodology uncovered by Climate Audit is as follows:

Editor's Note: Since this story was originally broadcast, errors have been identified in aspects of the data processing which may affect the results of this study. As a result, publication has been delayed and the research has been withdrawn from online publication. Professor Karoly says the data will be recalculated, peer reviewed and published in due course.


If not for our request of an update even this meagre offering would not have been undertaken. However mainstream, actual coverage of this important news by the ABC remains MISSING. One wonders if it plans to use editorial notes as a reporting tool for other important stories. Perhaps the following is an example of what we can expect from ABC news in the near future (you'll have to read the fine print). Perhaps this would save on costs? 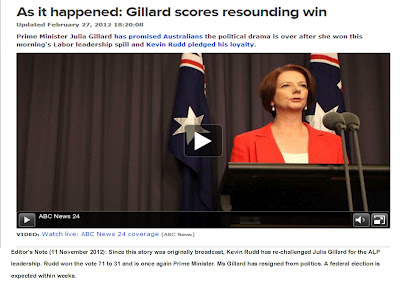 In contrast here are the ABC reports that announced the publication of the erroneous study back in May. Something does not appear to add up. But who are we to expect balance from the ABC?
5 major reports
AM 1000 years of climate data points to a warming Australia
The Science Show RISING TEMPERATURES ACROSS AUSTRALIA

Radio National Breakfast 1,000 YEARS OF AUSTRALIAN CLIMATE DATA CONFIRMS 'UNPRECEDENTED' WARMING (this one yet to contain the update)
Not to mention an appearances on ABC News 24 and ABC Local radio
SCORE +1
Posted by Marc Hendrickx at 2:41 PM